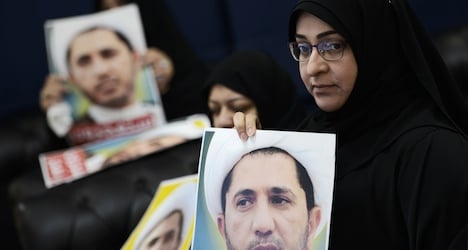 Bahraini women hold placards bearing the portrait of Sheikh Ali Salman, head of the Shiite opposition movement Al-Wefaq during a protest against his arrest on Monday. Photo: AFP

Jaafar Al-Hasabi, a prominent activist with British citizenship, filed the complaint as Al-Buainain attended a meeting in Zurich of the International Association of Prosecutors, where he may emerge as the body's vice president.

Al-Hasabi was subjected to electric shocks, beatings and other forms of torture while detained in Bahrain in 2010, according to a statement co-signed by four rights groups, including the European Centre for Constitutional and Human Rights.

“This type of torture can and must be held criminally liable — even abroad,” the statement said.

Christof Scheurer, a spokesman for Switzerland's prosecutor general, told AFP the complaint had been received and was being examined to consider possible next steps.

The rights groups urged Switzerland to call Al-Buainain in for questioning while he is in Zurich, and “not to hide behind diplomatic, political or economic justifications” for avoiding the case.

Al-Hasabi has moved to Britain, where he has been granted asylum and where British police were last year asked to probe allegations that his mobile phone and computer were hacked by agents of the Sunni-led kingdom.

Thirty-two countries on Monday raised the alarm over rights abuses in Bahrain during a session of the Geneva-based UN human rights council, specifically voicing concern over reported crackdowns on free speech.