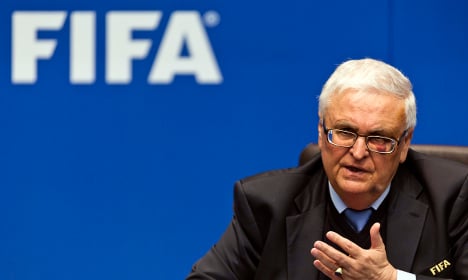 “It would be ideal to have a president who would step down after two years,” Swiss criminal law professor Mark Pieth, who previously headed Fifa's independent governance committee, told Swiss broadcaster SRF.

What was needed was someone who could “come in now to allay fears and make reforms, before making room for someone who could preside for longer,” he said, suggesting Theo Zwanziger, the former head of the German football association, was the best man for the interim job.

World football's governing body has been shaken to its core by the corruption scandal that on Friday reached the highest echelons when Swiss investigators turned their attention to Blatter and his heir-apparent, UEFA chief Michel Platini.

Authorities said a criminal investigation had been opened against Blatter on suspicion of criminal mismanagement, while UEFA chief Platini, who had been favourite to win a February election to find a successor to Blatter, faced scrutiny over a murky two-million-dollar payment he received from the Fifa president in 2011.

Fifa's independent ethics committee was believed to have opened its own investigation, and the two most powerful men in football could potentially risk suspension.

Both have denied any wrongdoing and 79-year-old Blatter has given no indication he intends to leave before his scheduled departure in February.

But media was awash Sunday with speculation over how long the Fifa president of 17 years could hold on.

But Pieth told the SonntagsBlick weekly Hayatou was not suitable, since “he is also a member of System Blatter”, pointing out that the Cameroonian himself had been accused of corruption and conflict of interest in the past.

Instead, he said, Fifa needed a “transitional president who did not grow up within the system, and who has not profited from the system.”

The 70-year-old Zwanziger, he said, would be perfect, since he had long been a powerful critic of Fifa's decision to award the 2022 World Cup to Qatar, widely criticized for its record on workers' rights.

The 2011 decision to hand the tournament to Qatar is a major element in corruption allegations engulfing Fifa.

“If Theo Zwanziger is chosen — as I hope he will be — as a two-year interim president, he will block Qatar for labour-law reasons,” Pieth said.