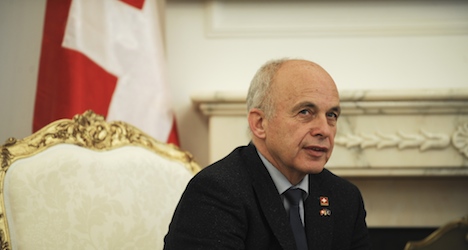 Ueli Maurer is the only SVP member in the seven-member federal government. Photo: AFP

A poll published by the SonntagsBlick weekly showed 27.8 percent of those questioned threw their support behind the anti-immigrant Swiss People's Party.

This is 1.2 percentage points more than SVP, already the largest party in the country, scored in the last elections four years ago.

Another poll earlier this month showed that immigration and asylum issues topped the concern of Swiss voters ahead of the October 18th elections.

Immigration has long been a hot-button issue in the country, where foreign nationals make up about a quarter of its eight million inhabitants.

The arrival in Europe of some 500,000 migrants since the start of this year — most of them refugees fleeing war and persecution in places like Syria — had fuelled concern in Switzerland.

While it has so far has been spared the huge influxes seen elsewhere, there has been a sharp rise in asylum requests, mainly from Eritrea.

Sunday's survey, conducted by the OpinionPlus institute between September 17th and 21st of 1,007 Swiss citizens planning to vote, showed a full third of those questioned believed SVP was the most competent party to deal with the refugee crisis.

The party, which in the past has illustrated its programme with a picture of white sheep kicking a black sheep off the red and white Swiss flag, said on Friday that it wanted a referendum on Switzerland's new asylum law, which it warned was too lax and would act as “a powerful magnet for illegal immigrants”.

SVP's lead in the polls does not mean it will dominate the next government.

Posts in the seven-member, five-party government, the Federal Council, are traditionally shared among the major parties from right to left under a tacit decades-old agreement dubbed “the magic formula”.