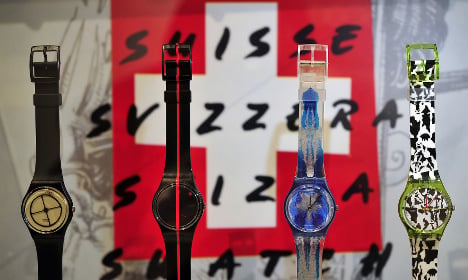 The collection, which will go under the hammer on November 10th, comprises around a thousand watches, among them 380 prototypes with an estimated value of over a million Swiss francs ($1 million).

The collection was put together by Marlyse Schmid and Bernard Muller, two designers who worked on the brand in the early 1980s before its launch.

Swatch, best known for its brightly coloured plastic-cased watches, is considered the product which saved the Swiss watch industry during the 1908s.

At the time, Swiss watches were hard hit by the emergence of Asian-made quartz timepieces.

It was in this context that a small team began to work in secret to develop a bold and innovative Swiss watch in a new and creative style, Sotheby's said.

Among the top lots is the original Jelly Fish — the first transparent watch dating back to 1983.

Designed by Marlyse Schmid, it was part of a limited edition of only 200 pieces.

In April, one of the biggest private collections of Swatch watches in the world went under the hammer at a Sotheby's auction in Hong Kong.

Comprising more than 5,800 timepieces and collected over a period of 25 years, it fetched $6 million.