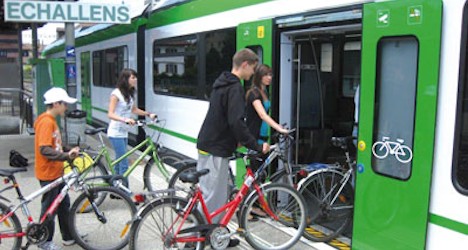 The tunnel would put 1.4 kilometres of the LEB railway underneath the Avenue d’Echallens, near the centre of the Vaud capital, the site of numerous accidents involving the train.

The proposal is to be submitted to the federal transport office on Tuesday, the Lausanne region public transport authority (TL) said in a news release.

The LEB electric railway, with a history dating back to the 19th century, is a 24-kilometre line linking the cantonal capital to the Gros-de-Vaud region to the north.

The tunnel is part of 300 million francs’ worth of improvements planned for the route.

A TL spokeswoman told Le Matin newspaper that cantonal authorities hope that Bern will contribute between 100- and 120 million francs for the tunnel.

It is seen as a priority to resolve safety issues currently posed by the train, motorists, cyclists and pedestrians jointly using the Avenue d’Echallens, TL said.

The train has collided with two buses on the road shared with motor vehicles, among high-profile accidents this year.

The LEB is the most heavily used regional rail route in the canton of Vaud, attracting an estimated 3.6 million passengers a year.

The tunnel project is subject to a public inquiry.

But TL said it hoped construction could start on the project in 2017 with completion by 2020.

LEB trains currently travel from the Flon area of downtown Lausanne through a tunnel almost a kilometre long before resuming the rest of the journey above ground.