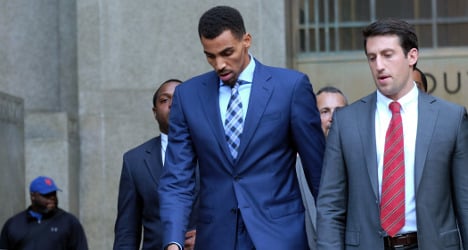 Lawyers for the Atlanta Hawks forward, who is black, maintain that New York police officers who arrested him handled him so aggressively that they broke his leg. Police say Sefolosha was belligerent, and that he called an officer a midget.

In any event, lawyers for the player, and Sefolosha himself, have cast the incident as another case of overzealous police handling of black men.

A wave of police killings of unarmed black men has become a defining issue across the United States, sparking a wave of protests and giving birth to a new generation of rights activists.

Sefolosha had ligament damage, had to undergo surgery as well as months of rest that he says made him miss the National Basketball Association playoffs.

The incident took place April 8th, shortly after another pro player, Chris Copeland, was knifed on his way out of the same club.

Prosecutors argue that Sefolosha did not obey the orders of police officers who were trying to clear a crime scene.

“He doesn't think the rules apply to him,” Jesse Matthews, an assistant district attorney, told jurors. “Defendant displayed a sense of entitlement and disdain.”

But Sefolosha's lawyer, Alex Spiro, had a different take.

“I think he (the arresting police officer) saw a black man in a hoodie,” Spiro said referring to the hooded sweatshirts favored by American teens and young adults.

Born to a Swiss mother and a South African father, Sefolosha is a native of Vevey in the canton of Vaud.

The 201-centimetre-tall athlete is the best known of four players from Switzerland currently playing basketball in the American big leagues.

He launched his career in Vevey with the Riviera Basket pro team before playing in France and Italy.

Sefolosha was picked in the 2006 NBA draft debuting with the Chicago Bulls before playing with the Oklahama City Thunder and for a year (2011-12) with the Turkish team Feberbahçe Ülker of the Euroleague.