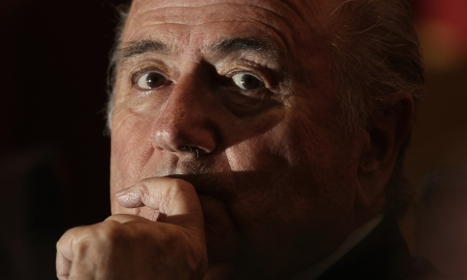 As the drama intensified Friday, Fifa announced that an extraordinary meeting of its executive committee would meet in Zurich on October 20th.

Some senior Fifa members had suggested the meeting could discuss postponing the election to replace Blatter — who has already announced he will stand down — currently slated for February 26th.

The row over Blatter's suspension had already taken a fresh twist as Fifa's ethics watchdog rejected the 79-year-old's claims he was not allowed to give evidence before he was banned, saying he was given “all his rights”.

Blatter's lawyers confirmed they had filed an official appeal and asked for further hearings with the ethics committee.

The New York Times earlier reported that Blatter had complained that he only found out about his suspension after it was made public.

But ethics committee spokesman Andreas Bantel said Blatter had been given the chance to put his case on October 1.

Platini, hit with the same suspension on Thursday, also “had the very same rights” at an interview on the same day, Bantel said.

Platini also plans to appeal against his 90-day suspension.

The Frenchman is a leading candidate in Fifa's presidential election in February, alongside South Korean tycoon Chung Mong-Joon who was banned from football activities for six years in the ethics committee purge.

Blatter, who has led Fifa since 1998, was provisionally banned by the ethics watchdog as Swiss prosecutors investigate him for criminal mismanagement.

The crisis at Fifa has been building since May, when US authorities announced charges against 14 officials and sports marketing executives over bribery allegations amounting to more than $150 million.

“These are exceptional circumstances and that is why we need the meeting. Only together will we overcome these difficult times,” Al Khalifa said, according to a statement from the AFC.

The German and English federations had made similar calls.

A Fifa spokeswoman told AFP Hayatou was expected at Zurich HQ on Tuesday.

Blatter, a 40-year veteran of Fifa, is still in Zurich, home of the organization's headquarters, a source close to him told AFP.

A cloud now hangs over Platini, the former French captain and one of the greatest players of all time, who had presented himself as the man to clean up Fifa after years of scandal and graft allegations.

The 60-year-old has been named in the investigation into Blatter because of a $2 million (1.8 million euro) payment he received in 2011.

He insists the payment was legitimate and slammed the Fifa ban as “farcical”, pledging to carry on with his bid to lead the world body.

“I reject all the allegations that have been made against me,” he said, indicating he too intended to appeal against the ban.

The 54-member UEFA will meet at its Nyon headquarters next Thursday to discuss the crisis.

The suspensions handed out on Thursday can be renewed for another 45 days when they run out in January, which would take the exclusion until just before the Fifa election.

Platini said he had still registered his official papers to be a candidate in the Fifa race.

The deadline is October 26th.

Further adding to the turmoil, on Friday the Swiss authorities approved the extradition to the United States of British-born businessman Costas Takkas, one of the officials whose arrest in May ignited the crisis.

Takkas is accused of taking millions of dollars in bribes in connection with the sale of marketing rights for 2018 and 2022 World Cup qualifiers.

Chung, a candidate for the Fifa presidency along with Platini, said Friday he would sue the world body for “damaging his reputation” over his ban and make a formal appeal to the Court of Arbitration for Sport (CAS).

The scion of the Hyundai family was found to have contravened rules while lobbying for South Korea's bid for the 2022 World Cup which was awarded to Qatar in a controversial 2010 vote.