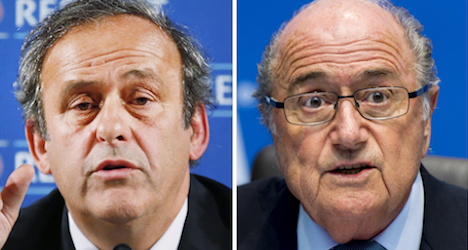 In his first interview since being handed a 90-day suspension from all football-related activities by Fifa, the former star player for France and Juventus told Le Monde that, although he had nothing in writing, he had made a “man to man” agreement with Blatter over the contested remuneration.

Platini added that, as he understood it, under Swiss law “an oral contract is worth a written contract”.

Fifa is based in Zurich and is subject to Swiss law.

Fifa chief Blatter, who is also serving a 90-day suspension amid a huge corruption scandal engulfing the game, said last week that the payment made to Platini in 2011 for consultancy work carried out years previously, was “a gentleman's agreement”.

Platini, who also had a spell as France coach, told Le Monde he felt Blatter was seeking to “kill me politically” over the payment which looks to have doomed any chance of his succeeding him.

He had been seen as favourite to take over in February until he was named in a Swiss criminal investigation into Blatter's management of Fifa.

“It was a contract I had with Platini, a gentleman's agreement,” said the 79-year-old Blatter in an interview with Swiss media RROTV.

“It was implemented. I can't give any more details, the issue is being discussed in two investigations.”

The suspensions on Blatter and 60-year-old Platini, were announced as Swiss authorities conduct a criminal investigation into corruption allegations at the scandal-tainted world football governing body.

Platini told Le Monde he felt “shame at being dragged through the mud”.

He explained that Blatter had wanted him to work alongside him at Fifa after the Swiss took over but he turned down the request as he was organizing that year's World Cup which France hosted and won.

Blatter then came back and asked for his services as an advisor, asking “how much do you want?”

Platini said he replied: “A million.”

Asked to specify which currency he said: “Whatever you want, rubles, pounds, dollars.”

He said Blatter agreed to pay a million Swiss francs per year (around $770,000 at the time).

Platini added: “I am not a money man” and said he told Blatter to “choose what you want to pay me”, saying he had full trust in Fifa.

Blatter was duly elected to head Fifa and Platini said: “I started working in the September.”

He said several months passed with no payments to him and he asked at the time if there was a problem.

Blatter said that it was difficult to pay him three times the 300,000 Swiss francs that Fifa's secretary general was earning at the time.

Quoting Blatter, Platini said: “'So we will draw up a contract for 300,000 Swiss francs and give you the balance later.'

Fifa's congress is due to meet on February 26th to elect a new president, but Platini's chances of succeeding Blatter have been badly hit by the payment row.

The FA said it had been told of more information “relating to the issues at the centre of this case from Mr Platini's lawyers” at a UEFA meeting last Thursday.

Platini's comments come just a day ahead of an extraordinary meeting of the Fifa executive committee, called to discuss the crisis which erupted in May with the arrest of Fifa officials ahead of a top meeting in Zurich.

Blatter and Platini will both be banned from attending the meeting, which was expected to consider postponing the February 26th vote on Blatter's succession.

Also on Monday, German prosecutors said they were looking into, but not yet formally investigating, claims that Germany bribed football officials to win the right to host the 2006 World Cup.

“This could be about corruption, fraud or breach of trust,” Frankfurt chief prosecutor Nadja Niesen told SID sports news agency, an AFP subsidiary.

“We will examine the available documents. But we are still at the very beginning and have not yet launched an investigation,” Niesen said.

“This could happen if we can confirm there is initial cause for suspicion.”

Germany won the right to host the 2006 World Cup by beating South Africa by 12 votes to 11 after New Zealand's Charles Dempsey abstained in the final ballot.

On Friday, Der Spiegel weekly published a report claiming that the German Football Association (DFB) had a slush fund to buy votes.