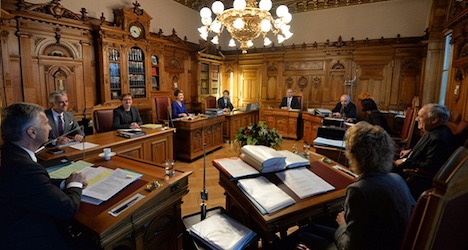 The SVP, after winning the most seats in the house of representatives (64 out of 200) is demanding a second seat in the seven-person government.

But most voters polled are opposed to the right-wing nationalists gaining more power in the cabinet, whose members are normally representatives of the major parties.

A survey, conducted for the Swiss Broadcasting Corporation by the gfs.bern polling institute, found that 38 percent were supportive of the government remaining unchanged.

By contrast, 26 percent wanted a return to the “magic formula” that would accord representation in the government based on the support of the major parties in parliament.

Such a formula would give two government seats to SVP members, two to the Socialists, two to the Liberals and one to the Christian Democrats.

The current government consists of one SVP member and a former member of the party, Eveline Widmer-Schlumpf, who joined the fledgling Conservative Democratic party after she won election to the government over SVP figurehead Christoph Blocher in 2007.

Blocher, a billionaire industrialist, was opposed by the other parties because he was not regarded as a team player at the cabinet table.

Widmer-Schlumpf, who was booted from the SVP, has proved to be more collegial and won re-election to government in 2011 despite the relatively few members of her party elected to parliament.

Around a third of voters polled said they favoured other formulas for the government, which will be elected in early December by a joint sitting of the upper and lower houses of parliament (200 MPs and 46 senators).

Six percent backed a formula that completely excluded the SVP while seven percent supported a government with only one Socialist instead of two.

The current government was given generally high marks by those surveyed, with almost three-quarters saying they had relatively or great confidence in the members.

Claude Longchamp, a political scientist with gfs.bern, said the level of confidence in the government was “sensational” on an international scale, the ATS news agency reported.

“Switzerland has been among the exceptional cases since 2008: the confidence (in government) here is rising while it is dropping in foreign countries.”

The telephone poll surveyed 1,017 voters on Sunday between noon and 6pm.