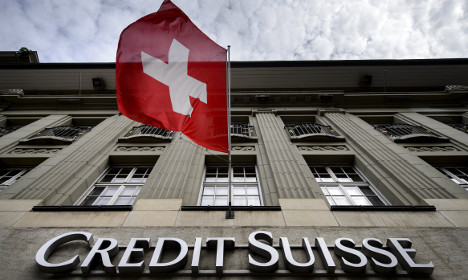 Around 1,600 jobs will go in Switzerland under the bank's new plan. Photo: AFP

The bank's stock took a beating on the results, plunging nearly five percent in the morning. By early afternoon the share price had recovered slightly and was down 2.4 percent at 24.29 Swiss franks.

Giving details of Credit Suisse's new strategy, Thiam said the bank was “taking decisive action to strengthen our balance sheet and capital position to the point where it will not be any more a source of concern for our
clients, our investors or our regulators”.

In concrete terms, the bank aims to save 3.5 billion Swiss francs ($3.7 billion, €3.2 billion) by the end of 2018 by, among other things, cutting loose a significant number of the some 60,000 people it employs globally.

In all, some 5,000 jobs are likely to be cut worldwide, including 1,600 in Switzerland, Thiam said on a conference call.

Credit Suisse also aims to raise a total of 6.05 billion Swiss francs ($6.3 billion, €5.6 billion) by selling stock to selected shareholders and existing investors. Shareholders will be asked to vote on the move on November 19th.

“We are rebooting the company, we are solving our capital issues,” Thiam told Bloomberg Television.

“One of our objectives coming in was to take capital off the table, to raise enough capital so that this would not be again a topic of conversation at quarterly results,” said Thiam, who was brought in four months ago to
restore investor confidence in the struggling bank.

As part of its new strategy, the bank, which last year was slapped with a whopping $2.8-billion US fine after pleading guilty to having helped rich Americans evade taxes, also said it aimed to get out of wealth management in the United States.

The bank also said it planned to “right-size” its footprint in London by transferring some 1,800 positions from the British capital to less expensive regions such as India.

In what some analysts said was the most significant announcement of the day, the bank said it plans an initial public offering for between 20 and 30 percent of the Swiss unit by the end of 2017.

Credit Suisse said it would split its securities unit into an investment banking and a markets business unit.

“I am confident we have the right structure and the right leadership to take our strategy forward,” Thiam said in a statement.

“It looks like a dramatic movement but Thiam is just doing what Dougan should have done years ago to improve the share price,” Bakhtiari said lauding his “drastic, but necessary” announcements, particularly the aim to develop profitable activities in Asia and cut down leveraged businesses.

The enthusiasm for Credit Suisse's new strategy was, nonetheless, tempered by its disappointing third-quarter results.