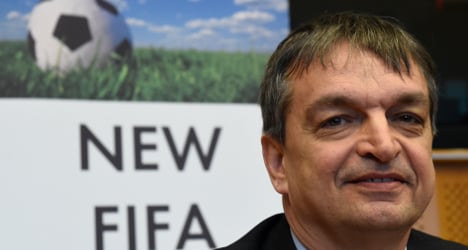 “I have submitted my candidacy and have the support of five member states (of Fifa),” the 57-year-old Champagne told AFP.

The former deputy general secretary of Fifa is the fourth official candidate for the election, which is scheduled to take place on February 26th.

His confirmed rivals are Uefa chief Michel Platini, Prince Ali bin al Hussein of Jordan and former Trinidad and Tobago captain David Nahkid, although others are known to be mulling a bid ahead of Monday's deadline.

The election to replace Blatter, who has been Fifa president since 1998 and who is standing down, comes at a time of crisis within world football's governing body.

Prosecutors are investigating top Fifa officials, including Blatter and Platini, as part of a wide-ranging clampdown on fraud and corruption at the heart of the Zurich-based organization.

“Above all we need to save Fifa and its role of governance and redistribution, which is in danger at a time when they are needed the most.

“We must also restore Fifa's credibility, and prepare it for the challenges of an ever evolving world, Champagne said in a letter he distributed to the Fifa member associations.

A former member of the French diplomatic corps, Champagne turned to football administration by joining Fifa in 1999, assuming several top roles including special advisor to Blatter (until 2002) then deputy general secretary (2002-2005).

“Things are very serious. We need a strong Fifa. Fifa has been in existence for 111 years and it has been responsible for many good things, but now it is time to undertake reforms,” Champagne told AFP in a recent interview.

“To carry out these reforms, we need someone who knows the organization from the inside and that is the case with me. The 11 years that I spent there (with Fifa) are not a handicap, on the contrary.”

Champagne had been considering a challenge to Blatter at the last presidential election in May but was unable to get the requisite backing from five member states.

Blatter eventually won that vote handsomely for a fifth term, but soon afterwards the corruption scandal engulfed him and he announced that he would stand down in February.