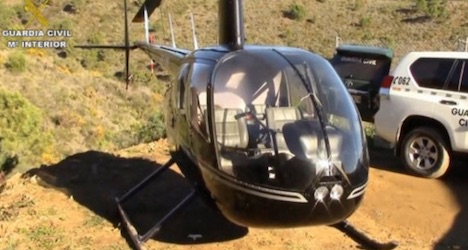 The 68-year-old pilot, a Frenchman who lives in Basel, is being detained in prison along with 14 other people after Spanish narcotics police busted two drug smuggling rings in the Malaga region, the Blick newspaper reported online on Monday.

The pilot, known as “Jack,” is accused, in addition to charges related to the cannabis cargo, of training helicopter pilots to smuggle hashish from Morocco, the Swiss daily said, citing police information reported by the Spanish newspaper ABC.

He allegedly trained the pilots to fly dangerous missions at night across the Strait of Gibraltar just above sea level to avoid radar detection.

Jack was arrested along a 46-year-old Swiss man whom he trained back in December 2014 but news of this only emerged from police following the arrest of others implicated in the drug smuggling operations.

Jack flew for many years with Rega and Air Zermatt and even worked between 2008 and 2010 for the Swiss Federal Office of Civil Aviation, the body responsible for supervising civil aviation activities in Switzerland, the newspaper said.

He and the man he trained were caught in a black helicopter that belongs to Airport Helicopter, a firm based in Neudorf in the canton of Lucerne, Blick said.

The company’s owner Hans Rudolf Müller told the daily he was shocked to learn the news.

“I was flabbergasted,” Müller said.

“I never thought that Jack was involved in such a thing.”

Müller said that Jack trained his Swiss co-pilot in Lucerne and then rented the helicopter for use in Spain for three months.

The agreement was supposedly to serve a Dutch family with flights between Malaga and Marbella.

Spanish authorities seized the helicopter but it was released a month and a half ago, Müller said.

The aircraft, a Eurocopter Ecureil, was transported to Switzerland by road, he told Blick.

The Local Spain reported last week that two other helicopters were also seized by Spanish police, along with an additional 210kg of hashish.

The 15 people arrested, including six French citizens, six Spaniards and two Moroccans, were charged with drug trafficking, membership of an organized crime gang and illegal possession of firearms.

Authorities opened their investigation in May 2014 when a helicopter loaded with hashish crashed at night after hitting electrical cables in southern Spain, killing its pilot.