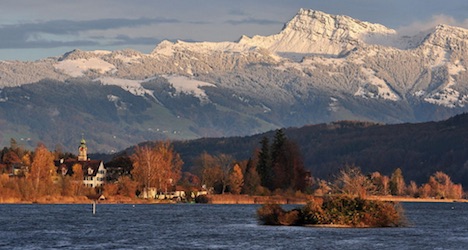 The incident occurred shortly after noon as the man and his wife were walking from Weesen toward the mountain, cantonal police said.

After the man fell his wife contacted emergency services but by the time they arrived they discovered the victim had died from his injuries, police said.

A brief Switzerland Tourism video gives an idea of how steep the terrain is around the Speer mountain, a 1,951 metre peak with a panoramic lookout overlooking Lake Zurich:

Later in the day, a 59-year-old woman was rescued after she slipped a fell while mountain hiking in the Rotrüfner area of the Weisstannen valley of Saint Gallen.

The woman was with a group of five people when she fell several metres from a trail, police said.

A companion, without a mobile phone, ran to the village of Sietz where he was able to contact emergency services, police said.

A Rega rescue helicopter was dispatched to the accident scene where the woman was retrieved and transported to hospital for treatment of “moderate” injuries, police said.

Meanwhile, on Saturday a 53-year-old woman died in another mountain hiking accident on the Mythen mountain in the canton of Schwyz.

She was with a another woman when for unexplained reasons she slipped and fell 350 metres down the mountainside, cantonal police said.