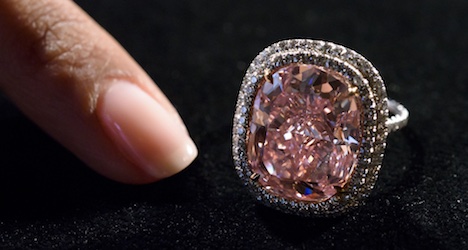 An unidentified bidder snatched up the 16.08-carat rare gemstone, kicking off a week of auctions that could see another coloured diamond set a new world record.

That stone, a 12.03-carat blue diamond described by experts as flawless, is being sold by rival auction house Sotheby's on Wednesday, and could fetch a record $55 million.

The pink diamond, owned by an American family for the past 15 years, is the largest cushion-shaped stone classified in the elite “fancy vivid” category to ever come to auction.

Christie's had listed the projected sale price between $23 and $28 million.

“This is an absolutely top price for a stone of this quality,” the head of Christie's luxury division, Francois Coriel, told journalists after the final hammer of the night fell.

Rahul Kadakia, the International Head of Jewellery at Christie's, had previously told AFP that the stone had the potential to fetch more than $30 million.

Christie's said that only three pink stones classified by the Gemological Institute of America as “fancy” and weighing more than ten carats have been up for sale in 250 years.

Coloured diamonds have been the centre of attention in the run up to the this week's magnificent jewel sales in Geneva, with experts insisting that the market for such rarities has grown increasingly robust.

All eyes will turn to Sotheby's on Wednesday, when its prized lot, dubbed “Blue Moon,” will aim to shatter the record for a stone sold at auction.

Discovered in South Africa in January last year, the Blue Moon is the largest cushion-shaped blue stone in the fancy vivid category to ever appear at auction.

Sotheby's has put its estimated sale price between $35-$55 million which, at the top end, would break the auction record.

A pink diamond holds the current world record for sale at auction, set by Sotheby's in November 2010 in Geneva, when a 24.78-carat pink diamond sold for $46 million.

The current record for a blue diamond belongs to the Zoe Diamond, which in November 2014 fetched $32.6 million in New York.

Among the other highlights at Christie's sale, was a 50.48-carat white diamond, which sold for $6.8 million, excluding commission.

Geneva's auction season, which began at the weekend, has already seen a number of high-profile lots snatched up, albeit at prices that seem ordinary compared to the enormous values attached to this week's coloured stones.

In the film, the watch is used to create a magnetic field which deflects bullets.

At Wednesday's Sotheby's auction, two pieces owned by another ex-Bond star will go under the hammer.

Scottish actor Sean Connery is selling a 15.4-carat pink and orange diamond, which could fetch above $2 million and a ring boasting 5.18 carats of diamonds, with an estimated sale price of $250,000.