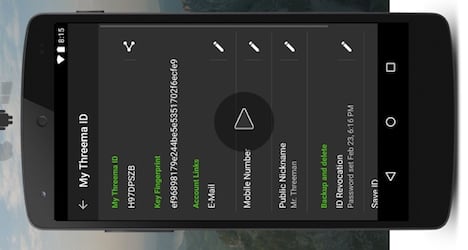 In a guide distributed by Isis to its jihadist followers in January, Threema was listed as a “safe” communication forum.

There is no evidence the gunmen who killed 129 people in Paris last week used Threema or any similar messaging system to communicate.

Asked about balancing the need for ensuring privacy in an era of massive data collection, including demands from intelligence agencies, Threema spokesman Roman Flepp told AFP that curbing encryption would not end attacks.

“We don't know how intelligence agencies gather their information but purely relying on total surveillance to gain control of smouldering social and political problems has never worked in the past and will not work in the
future,” Flepp said in an email.

The company, based in Zurich, offers a paid app that includes end-to-end encryption, meaning that only the sender and recipient can access the content.

Third parties, including the company whose systems transmit the message, cannot decipher the content.

Some Western political leaders and security chiefs have demanded that companies offering maximum encryption also design so-called backdoor keys, which could decode encrypted messages if, for example, a search warrant was issued.

Flepp did not comment on whether Threema can or would ever consider designing such a backdoor key, but said that while the company will always comply with Swiss law, it does not have access to its users private messages.

“Threema operates within the boundaries of Swiss law and will cooperate with Swiss authorities if legally required. However, possibilities are extremely limited since we have very little data and don't have access to the
private keys of our users,” he said.

And he maintained that despite the existence of real security concerns, with extremists using messaging services to communicate, the need for privacy remained absolute.

“Sacrificing some of the very foundations of our western democracies — liberty, privacy and freedom of speech —  for a false sense of security does not seem like a smart thing to do.”

In the aftermath of the Paris attacks, intelligence chiefs including CIA Director John Brennan have raised the alarm about undetectable messaging applications.