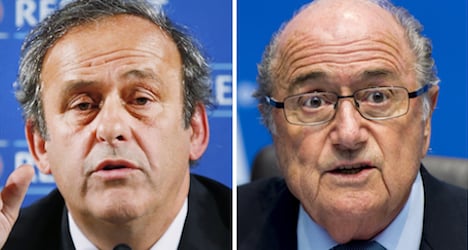 Citing privacy and the presumption of innocence, the committee said in a statement issued on Saturday that it
would not disclose the nature of the punishments requested against the two men, who for years were the most powerful figures in world football.

However, the announcement sparked an angry response from Platini's lawyer, who said that Fifa had “lost all credibility”.

The committee, known as the investigatory chamber of Fifa's independent ethics watchdog, said it had submitted its final report to the body's judgement arm, which will weigh up the recommendations.

The fallout from the report could prove massive for the future of world football's governing body, including the possibility of permanently derailing Platini's candidacy to lead Fifa.

The investigatory chamber said in a statement that its final report contained “requests for sanctions against Joseph Blatter and Michel Platini.”

A separate statement from the adjudicatory chamber confirmed that it had received the reports and will study the findings “carefully.”

The judgement chamber said it would “decide in due course about whether to institute formal adjudicatory proceedings against Joseph S. Blatter and Michel Platini.”

The adjudicatory body has in the past recommended suspensions of several years, or even life, but there was no indication as to the severity of the punishments requested against Blatter and Platini.

“It is a troubling coincidence!” Thibaud d'Ales, representing Platini, told AFP on Saturday.

“The day after our appeal to the Court of Arbitration for Sport against Michel Platini's provisional suspension, the internal Fifa investigation is suddenly finished for Michel Platini and Sepp Blatter, even though the latter
has been accused of more things.

“It's farcical. It would be laughable if we were not talking about the future of the biggest non-governmental institution in the world.

“Fifa has lost all credibility. A decision taken by judges who don't respect their own rules has no value.”

Both Blatter and Platini were provisionally suspended by the ethics committee in October for 90 days.

The moves came after Swiss prosecutors opened an investigation into possible criminal mismanagement at Fifa during Blatter's tenure, including evidence of a murky $2 million payment made to Platini in 2011, reportedly for work he did a decade earlier.

Aside from the Swiss probe, the United States justice department has charged 14 ex-Fifa officials and sports marketing executives with more than $150 million of bribery and corruption dating back decades.

Those indictments, unsealed in May, uncorked the scandal that has shaken world football and grown seemingly wider each week.

Appeals by both Blatter and Platini against their 90-day suspensions were rejected this week, and Platini has taken his case to the Court of Arbitration for Sport, with a decision expected by the end of the month.

Reversing the suspension which lasts until January 5th is crucial to the French football legend, because the provisional ban has thrown the brakes on his campaign to replace Blatter.

Platini, the head of European football until his suspension, had been the favourite to win Fifa's presidential vote scheduled for February 26th, until he became engulfed in the raging Fifa scandal.

While suspended, Platini cannot lobby regional confederations to support his candidacy, while the five other men vying for the job — who have already passed Fifa's integrity tests — are free to campaign.

The 60-year-old ex-Juventus star has denied all wrongdoing and has insisted that he can still lead world football out of an era that has seen its reputation stained at the highest levels of the game.

Blatter has also remained defiant throughout, insisting that he has done nothing wrong and that all financial impropriety that took place under his watch was the fault of rogue operators.

After winning election to a fifth term as FIFA's president, Blatter announced that he would go when his successor is chosen at a special congress called for February.

Despite the suspension, Blatter's camp has insisted that he will return to the presidency before the vote.