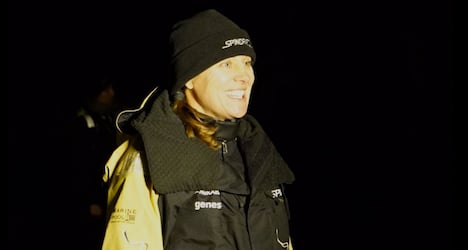 After the team waited a month for the right weather conditions, the Spindrift 2 set sail from Brest on the Brittany coast of France shortly before midnight on Saturday with Bertarelli and her companion Yann Guichard at the helm.

She is aiming to become the first woman to win the trophy by beating the current record for the fastest circumnavigation of the world by yacht of 45 days, 13 hours and 42 minutes.

The record was set in 2012 by Frenchman Loick Peyron, skipper of the Banque Populaire V trimaran, which was later acquired by Bertarelli and renamed Spindrift 2.

Hours before the departure in an interview with Le Temps, Bertarelli acknowledged having “butterflies in her stomach” after the long wait to cast off.

But she added that it was “practically a liberation” to be able to climb aboard the three-hulled racing boat and get going.

The 47-year-old Bertarelli is the sister of Ernesto Bertarelli and together with him she inherited Serono, a biotech company that was sold to pharmacy giant Merck in 2007.

The family ranks among the wealthiest in Switzerland and the world.

Ernesto Bertarelli gained fame as head of the Alinghi syndicate that won the America’s Cup yacht race in 2003 and 2007.

But Dona has proved herself no slouch as a sailor either, having won the 2010 Bol d’Or Mirabaud race on Lake Geneva, becoming the first female skipper to do so.

Her team Spindrift Racing won the Rolex Fastnet in 2013 when her team also broke the record for the America Route of Discovery, which traces a route taken by Christopher Columbus in 1492.

Bertarelli’s Spindrift Racing team is tracking on a website the progress of the trimaran, which had travelled more than 900 nautical miles (1,790 kilometres) on Monday morning after one day and almost five hours of sailing.