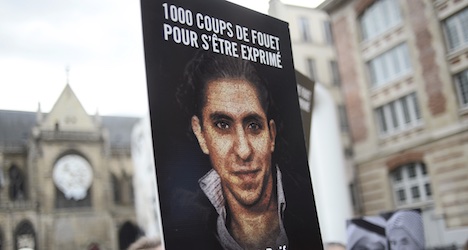 Ensaf Haidar has been outspoken over the plight of her husband since he was detained in 2012 on cyber crime charges and later sentenced for insulting Islam and calling for the end of the influence of religion on Saudi public life.

Yves Rossier, the secretary of state at the Swiss foreign ministry, said in the newspaper La Liberté on Saturday: “A procedure for a pardon is now under way before the head of state, that is King Salman.”

Haidar, who lives in Quebec with their three children after seeking asylum in Canada, reacted with guarded optimism.

“I hope this is true and I have confidence in the Swiss government,” she told AFP.

“I met the Swiss president (Simonetta Sommaruga) a few months ago and she assured me that the Swiss government was working very hard on Raif's case.”

Rossier raised the blogger's case during an official visit to Riyadh this week.

Badawi received the first 50 of his 1,000 lashes sentence in January but there have been no more, following criticism from the European Union, United States, Sweden, Canada, the United Nations and others.

His lawyer Walid Abulkhair, who is also in prison, received Friday in Geneva an international human rights prize for his work defending rights in the oil-rich kingdom.

Abulkhair, who received the Ludovic Trarieux International Human Rights Prize, is renowned for his defence of Badawi.

He himself was sentenced last year to 15 years in prison on charges of trying to undermine the state and insulting the judiciary.

South African anti-apartheid icon Nelson Mandela, while still in prison, was the first in 1985 to receive the Ludovic Trarieux prize, awarded by European bar associations to lawyers who defend human rights and fight against intolerance and racism.

“We hope that this prize will play a role in the liberation of certain people,” said Jean-Marc Carnice, head of the Geneva bar association, at Friday
night's award ceremony.

“It will in any case shed light on the abuse of certain governments, to bring them to the attention of the international community,” he added.