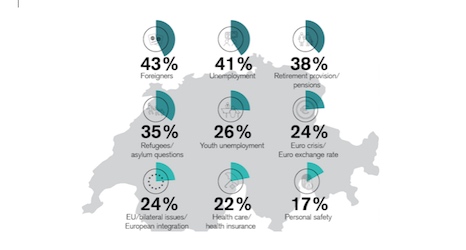 Top worries of the Swiss population as a percentage of the voting population. Graphic: Credit Suisse

Immigration issues were a concern for 43 percent of people surveyed for the 40th annual report from Switzerland’s second largest bank, up from 40 percent last year.

Foreign residents now account for almost a quarter of Switzerland’s population, up from 15 percent in the 1980s, and the upward trend “is increasingly seen as a burden”, the report said.

The issue of foreigners has grown since voters in February 2014 approved a popular initiative “against mass immigration”.

Apprehension about loss of jobs topped the concerns in the survey, with 56 percent saying unemployment or youth unemployment was their main worry.

Despite the fact Switzerland has one of the lowest jobless rates in Europe, unemployment has remained the main preoccupation of the Swiss since 2003, according to the report.

Other findings suggest the Swiss have never been so proud of their country — with a record 94 percent expressing this pride.

Citizens surveyed said that neutrality (48 percent) was the nation’s biggest strength, while egoism was seen as the biggest threat to Switzerland’s identity.

Asked whether they are personally doing well, 86 percent said yes.

The results are based on a survey of 1,009 people by the gfs.bern institute, commissioned by Credit Suisse.