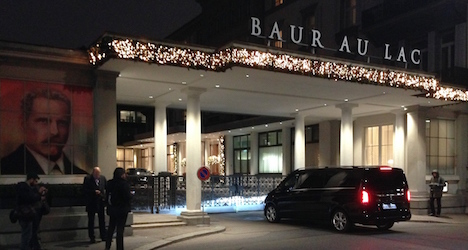 “The high-ranking Fifa officials are alleged to have taken the money in return for selling marketing rights in connection with football tournaments in Latin America, as well as World Cup qualifying matches,” the Swiss justice department said in a statement.

The Swiss announcement came after The New York Times on Thursday reported that several football officials had been arrested in dawn operations, some of them at the same luxury hotel in Zurich raided by authorities in May.

The Times, which broke news of the police raids earlier this year, said Swiss police entered the Baur au Lac hotel at around 6am on Thursday.

The Swiss Federal Office of Justice (FOJ), confirmed the dramatic widening of the scandal that has been rocking the football world body
for months.

It said it had ordered Zurich police to arrest the two “based on arrest requests submitted by the United States Department of Justice on November 29th 2015.”

According to ongoing investigations carried out by the US Attorney's Office for the Eastern District of New York, the two are “suspected of having received bribes,” the FOJ said.

“According to the US arrest requests, they are suspected of accepting bribes of millions of dollars . . . some of the offences were agreed and prepared in the USA,” it said in a statement.

“Payments were also processed via US banks.”

Fifa told AFP in an emailed statement that it “became aware of the actions taken today by the US Department of Justice.”

It vowed to “continue to cooperate fully with the US investigation as permitted by Swiss law, as well as with the investigation being led by the Swiss Office of the Attorney General.”

The corruption scandal rocking Fifa since May has seen the Zurich-based organization's longtime president Sepp Blatter suspended and under criminal investigation in Switzerland, while Michel Platini, once seen as his likely successor, is also suspended and facing a life ban from football.

The Swiss justice department did not name the two arrested, but said it would do so by the day's end.

Blatter was not a target in the latest round of arrests, according to the Times report.

The FOJ said the Zurich cantonal police, acting on behalf of the justice department, would hold hearings on the US arrest requests before the end of the day.

“Simplified proceedings apply if the wanted person declares at the hearing that they agree to be extradited immediately,” it said, pointing out that “in such cases, the FOJ may approve extradition to the USA immediately, and order its completion.”

“However, should any person oppose their extradition, the FOJ will ask the USA to submit a formal extradition request within the 40-day deadline laid down in the bilateral extradition treaty,” it added.

Two of the seven former Fifa officials arrested in Zurich in May agreed to simplified proceedings and have been transferred to the United States, but the five others have opposed the move and their appeals against the extradition decision are pending in a Swiss criminal court.