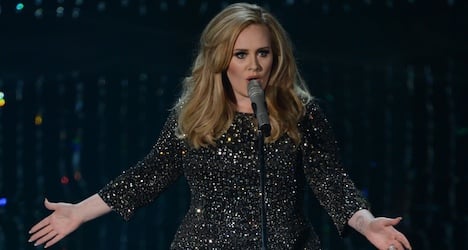 The sale was for 13,000 places at an additional concert in Switzerland’s largest city for the top-selling singer after tickets for a first concert sold out last week in three minutes.

The May 17th and 18th events are the only ones planned in Switzerland for her European tour, her first since 2011.

The tour is set to open in Belfast on February 29th 2016 and will also include stops in England, Scotland, Sweden, Norway, Denmark, Germany, Portugal, Spain, Italy, the Netherlands and France.

The tickets for the Zurich concerts were advertised at 90 francs for general admission and 110 francs for seated places.

But shortly after the tickets were sold out, scalpers were offering them on online platforms such as Ricardo for as much as 700 francs, broadcaster SRF reported.

There is no law in Switzerland against the resale of concert tickets.

But consumer groups are warning against counterfeiters offering fake tickets for high prices.

Adele’s latest chart-busting album 25 has sold 4.49 million copies in its first two weeks of sale in the US alone, according to Billboard, and has topped the Billboard 200 albums chart for the past two weeks.