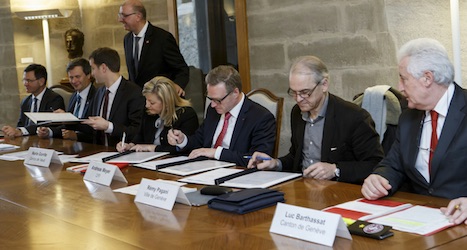 The federal contribution of 1.074 billion francs was announced on Monday at a press conference for the 1.6-billion-franc project involving government officials and those from Swiss Federal Railways (SBB, or CFF in French).

The canton of Geneva has agreed to inject 416 million francs into the project, while the city of Geneva is contributing 111 million francs for the mega-project, subject to legislative approval.

Construction, expected to last six years, is not set to start until 2024 and a margin of risk of 30 percent could boost the price tag.

The federal contribution comes from an envelope of 6.4 billion francs in capital projects for the SBB, approved by Swiss voters last year.

In June this year, a panel of experts concluded that going underground was the best option for expanding the number of rail lines through the Cornavin station.

Two lines and a platform are to be built beneath the existing station at a depth of 17 metres below ground, which will involve the construction of a five-kilometre tunnel, SBB said in a news release.

Going underground will avoid having to demolish residential buildings in the Grottes neighbourhood adjacent to the station, the rail operator said.

The agreement represents a victory for Geneva, which opposed initial plans to build the two extra lines above ground at a lower cost

The station project complements the Léman 2030 project which aims to double the passenger capacity of trains between Geneva and Lausanne, which also involves extensive renovations of the Lausanne station.

TRAIN TRAVEL
‘We are supposed to be borderless’: Why train travel in Europe is not up to speed
Url copied to clipboard!