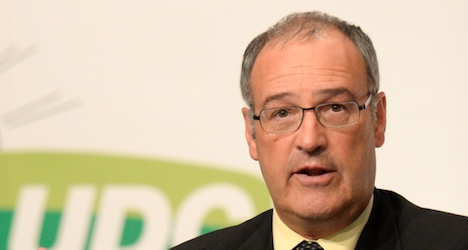 Parmelin, an MP and farmer who comes from the winemaking village of Bursins, near Nyon, brings to two the number of SVP members in the seven-person government.

He replaces outgoing Eveline Widmer-Schlumpf, the finance minister, who announced her resignation after serving two terms in office.

The government members were elected by a joint assembly of the upper and lower houses of parliament.

The six incumbents were re-elected as expected but suspense hung over the election of Widmer-Schlumpf's replacement.

Widmer-Schlumpf did not disclose the reasons for her departure, but her position on the council had become increasingly politically untenable.

She was once a member of the SVP's moderate wing and in 2007 beat out the party's firebrand billionaire leader Christoph Blocher for a government seat.

The SVP then kicked her out of the party, but she held onto her seat under the Conservative Democrats' banner, a party she created, which claimed just four percent support in October.

After winning 29.4 percent of the vote, the SVP intensified its calls to reclaim a second federal council seat.

Parmelin, 56, was one of three official candidates presented by the SVP, one each from the three different linguistic regions of the country (French, German and Italian).

The right-wing nationalist party maintained it had the right to two seats on the government because it has the highest representation in the house of representatives, the lower house of parliament.

One of the SVP candidates was expected to be elected.

However, other parties had expressed concerns about the SVP’s lack of collegiality, seen as necessary for the government, which traditionally makes decisions by consensus.

The SVP is known for its virulent campaigns against immigration, the European Union and Islam.

But Parmelin was ultimately elected with 138 votes after three rounds of voting (120 votes were required for an absolute majority).

The 56-year-old Parmelin, a member of parliament since 2003, is seen as a pragmatist and more palatable to other parties than some of the extreme right wingers that the SVP proposed for a government seat.

The other parties represented in the federal council are the centre-right Liberal Party, the Socialists and one representative from the centrist Christian Democrats.

Among the incumbents, Didier Burkhalter, foreign affairs minister and member of the Liberals, obtained the highest support with 217 votes from the joint assembly of the upper and lower houses of parliament.

Meanwhile, Schneider-Ammann  was elected as president of the Swiss federation for the next 12 months.

The rotating position has limited powers and alternates each year between the seven government ministers.

Schneider-Ammann will formally replace Sommaruga of the Socialist Party as president at the end of year.