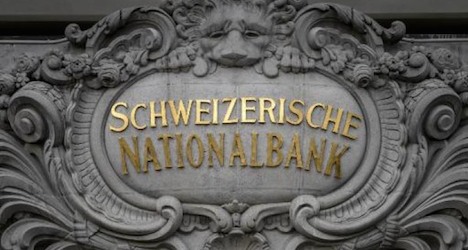 The interest rate for large deposits with the Swiss National Bank remains at 0.75 percent while the target range for the three-month Libor, the borrowing rate for banks, remains between minus 1.25 and minus 0.25 percent.

Jordan said the SNB remains active in the foreign exchange market as necessary to ease pressure on the franc.

The negative rate remains below those of other jurisdictions including the eurozone, despite the European Central Bank’s “mild interest rate” last week, and the gap is markedly higher than at the beginning of the year.

The franc continues to trade at historically high levels against the euro after briefly hitting parity in January when the SNB decided to abandon a floor for the euro of 1.20 francs maintained for more than three years.

In mid-morning trading on Thursday, the euro was trading at 1.08426 francs, relatively unchanged from the previous day, although it had softened before the SNB’s press conference.

The Swiss central bank said despite a slowdown in the third quarter it still anticipated Swiss economic growth of just under one percent for 2015, rising to 1.5 percent in 2016.

The predicted higher growth next year is based on a forecast gradual improvement in the global economy, which is expected to boost demand for Swiss goods and services.

The SNB said inflation, forecast at minus 1.1 percent for this year, is expected to remain negative until 2017.

At least one group was unhappy with the central bank's strategy on the franc.

The Swiss Federation of Trade Unions (SGB), worried about the impact on jobs caused by the high franc, said the bank was not doing enough.

It issued a statement indicating that the bank should be restoring a minimum price floor for the euro, as it has done in the past against the common European currency and as it did previously for the Deutsche Mark.

A strong franc makes Swiss exports more expensive to customers outside of Switzerland.