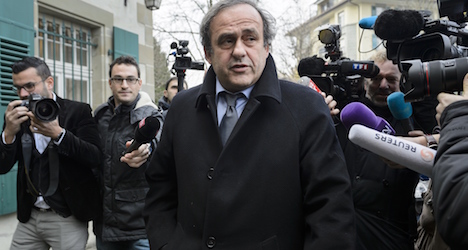 Platini, head of Swiss-based Uefa, the European football body, and a Fifa vice president, had been the favourite to succeed Fifa president Sepp Blatter, until he was named in a Swiss criminal investigation in September.

Zurich-based Fifa's ethics watchdog reportedly wants to ban him for life and suspended Blatter and Platini while an investigation over a $2 million payment is completed.

Platini appealed against the suspension, insisting he had done nothing wrong and was being unfairly blocked from campaigning to lead world football's governing body.

The CAS panel “determined that maintaining the provisional suspension for the remainder of the 90 days does not cause irreparable harm to Michel Platini at this point in time,” a court statement said.

The suspension expires on January 5, and the court ruling noted that even if it were lifted, there was no guarantee that Fifa's electoral committee would approve Platini's candidacy before the temporary ban runs out.

CAS however ordered Fifa not to extend the provisional suspension, as that would “constitute an undue and unjustified restriction of Michel Platini's right of access to justice.”

An extension of the ban seems unlikely as Fifa's in-house court has said it will issue a final ruling on Platini's case by the end of the year.

Fifa's internal investigators submitted a report on the Platini affair to ethics judges last month and have called for a lifetime ban, according to Platini's lawyers.

That verdict would deliver a final, crushing blow to Frenchman's career as a football executive.

Fifa opened the investigation into Platini after Swiss prosecutors said he had been questioned over a 2 million Swiss franc ($2-million) payment Platini received from Fifa in 2011 for work done a decade earlier.

Blatter and Platini acknowledge there was no contract for the fee, but insist that their “oral contract” is valid under Swiss law.

The 60-year-old Platini will appear at the FIFA court next week to mount a defence against the ethics inquiry findings.

In a statement, FIFA took note of the CAS decision, saying it “ratified” the ethics committee's decision on the provisional ban.

With the possibility of a lifetime suspension pending, a victory on Thursday would not have marked the end of Platini's problems.

But it would been a symbolic win for the man who seemed on track to become the most powerful figure in the world's most popular sport.

It also would have left him free to take part in Saturday's draw for the 2016 European Championships in Paris.

France is hosting the tournament and Platini has been a key organizer as Uefa president.