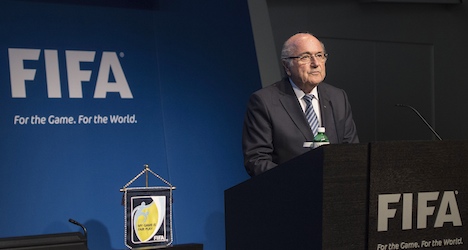 Blatter announcing in June that he was quitting. Photo: AFP

Blatter made the comments in a letter to Fifa's 209-member associations, which the Swiss national sent in a private capacity amid his suspension over corruption allegations.

“The manner in which the investigatory chamber of the ethics committee communicates in the ongoing investigation, calling for the maximum penalty and reinforcing public prejudice, introduces a tendentious and dangerous dimension,” Blatter wrote.

He described the ethics investigation of the world governing body for football as “an inquisition”, a comparison he has made multiple times in recent weeks.

His spokesman Klaus Stoehlker separately told AFP that Blatter was referring to comments made by the spokesman for the ethics committee's investigatory chamber, Andreas Bantel.

Bantel told the French newspaper L'Equipe that Blatter's punishment would be the equivalent of a “life ban” because he is already 79, comments that some saw as violating the presumption of innocence as they came before a verdict was delivered.

The ethics committee, which suspended Blatter and Uefa boss Michel Platini in October, is partly probing a $2-million payment Blatter authorized to Platini in 2011, reportedly for work done a decade earlier.

Both men insist the payment was legitimate and part of an oral contract between Platini and world football's governing body.

Blatter is due to appear before ethics judges at Fifa's headquarters in Zurich on Thursday.

“I will continue to fight for my rights — and at the end of this week I will defend my point of view in front of the judgement chamber with conviction and a firm belief in justice,” he wrote.

In past years, Blatter has sent out the letter in his capacity as Fifa's president, a position he has held since 1998.

Fifa's in-house ethics court is expected to issue its verdict on both Blatter and Platini early next week.