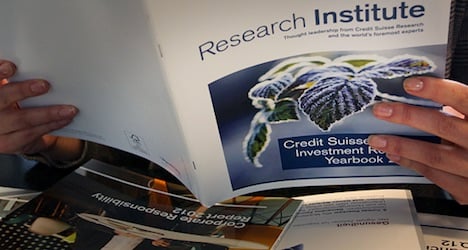 “The strong Swiss franc will continue to have an adverse impact on the export sector in 2016 and the domestic economy will therefore see a further slackening of growth momentum,” Switzerland’s second largest bank said in a quarterly report issued online on Tuesday.

Expected growth in GDP is “well below the long-term potential growth rate” and may even be negative on a per capita basis, as the population increases, Credit Suisse economists said.

However, they expect immigration will continue to be strong, while negative inflation is boosting purchasing power and favourable lending rates are having a “stabilizing effect”.

As a result, Credit Suisse does not expect Switzerland will fall into a recession in 2016.

The bank said that negative interest rates (minus 0.7 percent on large deposits) introduced at the beginning of the year by the Swiss National Bank in a bid to prevent the franc from appreciating further in value are beginning to have the intended impact.

Foreign banks, in particular, have reduced their holdings of francs, Credit Suisse said.

But the “severe shortage” of investment opportunities is leading to a rise in “high-yield real estate investment,” it said.

Negative interest rates are also lowering financing costs for the government, which is gaining around one billion francs annually in lowered spending.

But the rates are also creating risks in the funding of pensions, which could ultimately end up putting a burden on the government.

And they are weakening profitability in the financial sector, the report says.

For a variety of reasons, though, Credit Suisse said it expects low interest rates are likely to persist in the next year.

For more information on the report check here.