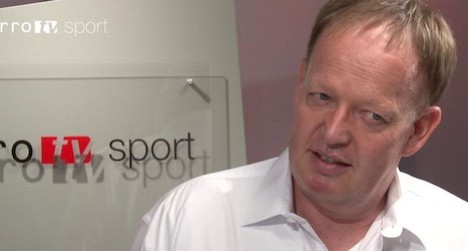 Dill-Bundi, winner of a gold medal in the individual pursuit cycling race at the 1980 Moscow Summer Olympics, was handed a sentence equivalent to a fine of 3,150 francs suspended for two years by the Vevey police court, the ATS news agency reported.

The pile-up occurred on August 22nd 2013 in the town of Aigle after thge 57-year-old star cyclist lost awareness of what he was doing while driving his BMW in the town, 45 kilometres southeast of Lausanne.

He was convicted of causing two accidents, one after the other, that left 11 people injured after he ran a red light in Aigle.

The town at the foot of the Vaud Alps is home to the headquarters of the International Cycling Union (UCI), the world governing body for the sport.

Some of the most severely injured in the crashes have launched lawsuits against Dill-Bundi for damages, including a man in his 50s who is now confined to a wheelchair.

In addition to the suspended sentence, the court ordered him to pay a total of 36,000 francs in costs to the victims.

The former athlete, who was recovering from brain cancer, had been advised by a doctor a week before the accident not to drive, ATS said.

“He was conscious of the risks,” the news agency quoted Judge Sandrine Osojnak as saying.

“It was dangerous for the others and for himself.”

In 1999, he was diagnosed with a malignant brain tumour but treatment, including experimental “electric” therapy, succeeded in shrinking the tumour.

His accident occurred several months after he had publicly announced a plan to leave Switzerland for a “new life” in Cuba, where he was to relocate with his second wife, Yamila, who is from Havana.

Dill-Bundi has not said whether he plans to appeal the court’s ruling.