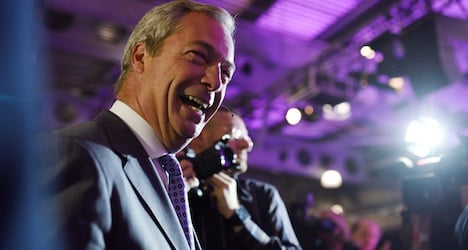 Farage, who leads a party that want to take Britain out of the European Union, will visit the federal parliament building after being invited by Yves Nidegger, an SVP member of the lower house of parliament in Bern and an MP in the Geneva cantonal parliament, the report said.

Farage will be accompanied by other members of his party but his visit will be an informal affair without any official status, RTS said.

“I believe there is a sincere interest in understanding how we function, because they (UKIP) refer more and more the Swiss example, which they realize they do not know,” Nidegger told the broadcaster.

“It is a civilized offer on my part to these Europeans who really want to interest themselves in our method of direct democracy and also the ingredients that allow the survival of the country (Switzerland) without being fully a member of the European Union.”

An exit from the European Union is a the raison d’être of UKIP and Farage, its leader, RTS noted.

Five other members of UKIP will join the delegation, as well as an elected politician from Lithuania and one from Sweden, all members of the Europe of Freedom and Direct Democracy Group of the European parliament.

Farage is chairman of the group of 45 MEPs.

In the 2015 general election in Britain in May he failed to win election to parliament in the constituency of South Thanet in Kent.

He subsequently announced that he was stepping down as UKIP leader but his resignation was rejected and he remained in his post.