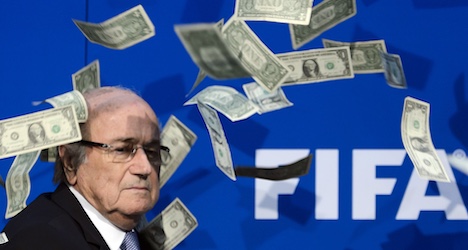 Blatter at a press conference at Fifa's Zurich headquarters in July when a protestor threw fake dollars at him. Photo: Fabrice Coffrini/AFP

Swiss prosecutors say it was a “disloyal payment” and have placed veteran football powerbroker Blatter under investigation.

Blatter and his ally-turned-arch-rival Platini — both banned for eight years by Fifa on Monday — have twisted themselves in knots trying to explain the 2011 transfer.

Unless they make successful appeals, the cash has destroyed two glittering sporting careers.

Blatter has said that from 1999 — after he had secured the Fifa presidency — until 2002, Platini was a consultant to the world body.

The Frenchman was at the time considered a Blatter protege.

Platini told Le Monde about his talks with Blatter, who had asked “how much do you want?”

“I answered: 'one million'.

“In what? Whatever you want — rubles, pounds, dollars,” Platini quoted Blatter as saying.

“At this time there was not yet the euro. He (Blatter) answered: 'OK one million Swiss francs a year'.”

Platini told AFP in September that Blatter had informed him “that it was not initially possible to pay the totality of my salary because of Fifa's financial situation at that time”.

He added: “I did not actively pursue it. I even put the matter to the side for a while, before finally requesting that the outstanding balance was paid in 2011.”

Two million francs was finally paid a few weeks before Blatter was reelected to a fourth term in 2011.

Platini backed Blatter, who had faced opposition, at the election on the understanding it would be his last term — the Swiss official allegedly promised Platini it would be.

Platini has said the fact the payment was made close to the election is “irrelevant”.

Blatter and Platini have each said there was an oral contract for the payment and insist this is legal under Swiss law and Fifa regulations.

This was rejected by the Fifa ethics court in their ruling. It said the payment had “no legal basis in the written agreement signed between” Blatter and Platini in August 1999.

“Neither in his written statement nor in his personal hearing was Mr Blatter able to demonstrate another legal basis for this payment. His assertion of an oral agreement was determined as not convincing and was rejected by the chamber.”

Blatter has also been made a suspect for “criminal mismanagement” by Swiss prosecutors and Platini has been questioned over a role described as between a witness and a suspect.

Fifa's ethics commission temporarily suspended both for 90 days in October.

It had turned against the president who set up the commission in a bid to improve Fifa's image and dealt a blow to Platini's hopes of becoming Fifa president when Blatter officially stands down on February 26th.

Fifa officials have raised strong doubts about the cash transfer.

“Based on my knowledge, there was no written contract regulating the payment of two million Swiss francs,” Domenico Scala, head of Fifa's audit commission told the Financial Times in October.

“In any normal business, there would be a written contract.”

Scala said it was even more serious that there was an apparent “conflict of interest” because the deal involved two top Fifa executive members and because the money owed is not mentioned until it was paid in 2011.

“That is a serious omission, and both parties were members of Fifa's executive committee and knowingly approved each year financial statements which were incorrect by two million Swiss francs. That could be seen as falsification of the accounts.”

Blatter now faces a nervous wait to see how far the Swiss charges against him go and whether he is dragged into a US investigation into football corruption.

Swiss officials have warned their case could take five years to complete.

Fifa remains in the crosshairs of prosecutors.

The award of the 2018 and 2022 World Cups to Russia and Qatar respectively is still being investigated.