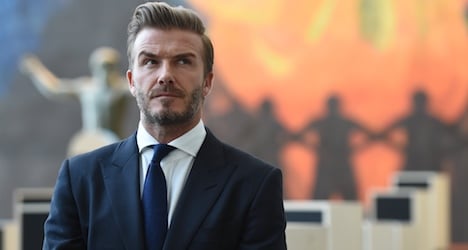 David Beckham: "No matter what corruption is going on at the highest level, it will never be as big as the game itself." Photo: AFP

Some felt the former heads of Fifa and Uefa had got off lightly, while others criticized the length of the suspensions as too “harsh”.

Former Asian Football Confederation (AFC) general secretary Peter Velappan, who occupied that position when Asia hosted its first ever World Cup in South Korea and Japan in 2002, said the length of the bans was like a “death sentence”.

“This is very harsh, especially for Blatter because he dedicated his life to football and Fifa,” said Velappan.

“It's unfortunate that the bribery scandal happened and you can't take away the blame from him either but still, eight years is too harsh. Eight years is like a death sentence.”

Velappan backed the pair's record in boosting football in Asia and said that should have been taken into consideration.

“Blatter and Platini are football personalities and you have to look at the contributions they have made to the game,” he added.

“A one or two-year ban would have been understandable. This is very unkind.

“They have both done a lot for the AFC and football.”

However, for Spanish Football League president Javier Tebas, the bans should have been longer.

“Eight years, that doesn't seem much to me. Platini's sanction . . . is due to the fact that they didn't respect the normal Fifa internal procedures,” he said.

“Bypassing economic controls is very serious and the sanction should ensure they can never again exercise power in a sporting institution.

“They no longer deserve the confidence of the world of football and sportsmen.”

For English football icon David Beckham, this episode should be used as an opportunity to implement vital reforms in the game.

But the former Manchester United and Real Madrid star remains upbeat about the future.

“I'm sure at some point there will be a huge amount of change at Fifa,” he said.

“No matter what corruption is going on at the highest level, it will never be as big as the game itself.”

Former English Football Association chairman David Bernstein said it would be unfair to bung Blatter and Platini into the same bracket.

And he said he had little faith in the FIFA court's judgement.

“There's a bit of a kangaroo court feel about some of this. Perhaps more relevant for Platini than Blatter because there's a distinction between the two,” said Bernstein.

“Blatter has presided over a corrupt organization for many, many years. The Swiss authorities and US authorities are after him . . . he'll get what he deserves.

“Platini is very different. He's presided over a very straight organization. Uefa is not mired by corruption.

“Platini has got wrapped up with Blatter, he's got too close to him. What an amateurish way this payment has been handled. It makes you feel Platini has been naive.”