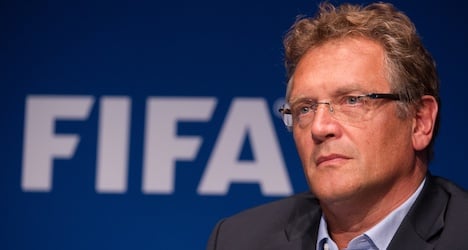 “The extension of the suspension starts from today,” the adjudicatory chamber of the Ethics Committee chaired by Hans-Joachim Eckert said in a statement.

The investigatory chamber of Fifa's ethics committee had called for the extension on Tuesday, requesting more time for evaluating the evidence against Valcke.

Ultimately, they said, they want to see the suspended secretary general banned from football for nine years.

Valcke's suspension followed allegations of involvement in a ticketing scam, in which he was accused of selling Brazil World Cup tickets on the black market at above their face value.

He had previously been accused of being party to a potential $10-million bribe paid to former head of the North and Central America football governing body Concacaf, Jack Warner.

Even if the adjudicatory chamber had not extended his suspension, he would not have been able to return to work as he has also been banned indefinitely by Fifa's management, a penalty that is separate from the ethics committee suspension.

Valcke's lawyer on Tuesday blasted the Fifa investigators, insisting that his client “did absolutely nothing wrong as any independent and fair review of the facts would establish.”

“The Investigatory Chamber of the Fifa Ethics Committee has chosen to ignore Jérôme Valcke's exemplary conduct and extraordinary contributions during his long tenure as Secretary General,” Barry Berke added in a statement.

He insisted that the demand for a nine-year-ban was “nothing more than a self-serving public relations effort to wrongly attack Mr. Valcke in a desperate attempt to try to prove that Fifa can police itself.”

Valcke's potential downfall is only the latest in world football, hit by an unprecedented series of scandals that have sparked demand for major reform across the globe.

Fifa president Sepp Blatter, 79, and Uefa chief Michel Platini, 60, who until recently had been expected to take the helm of Fifa, were last month banned from football for eight years, although they could still appeal the sanction.

Meanwhile, the Swiss justice department said on Wednesday that Alfredo Hawit, a Fifa vice president arrested during a pre-dawn raid in Zurich in December, has agreed to be extradited to the United States.

When the transfer is carried out, Hawit, a 64-year-old Honduran national, will become the fifth FIFA official extradited by Switzerland to the United States to face corruption charges.

Three others arrested in Zurich in May are still challenging transfer to US courts, while Eugenio Figueredo, the former president of South American confederation Conmebol, has been extradited to his home country of Uruguay.

Hawit, the president of the Confederation of North, Central America and Caribbean Association Football (Conccacaf) was suspended from football by Fifa on December 4th, the day after his arrest.