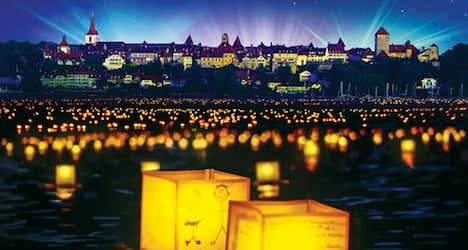 Inspired by a similar festival that has made Lyon famous, the town in the canton of Fribourg overlooking the Murtensee (Lake Murten) has hired Spectaculaires, a French company famous for illuminating cities around the world.

The firm is already known in Switzerland for lighting up the federal parliament building for the past four years.

It decided to accept an invitation to help Murten with its first lights festival.

“Their welcome and their project pleased us a lot even if it’s the first and that we are dealing a bit with the unknown,” Benoît Quero, director of Spectaculaires is quoted as saying by the 20 Minutes newspaper.

The largely German-speaking municipality has a 300,000-franc budget for the light show and various related activities set to start in its Old Town on January 13th, running until January 24th.

The town of 6,500 people, known in French as Morat, said visitors will be able to follow a promenade where animations will combine sounds and lights nightly from 6 to 10pm.

A projection shown on the wall of the town’s primary school will be one of the centrepieces, where a video lasting about ten minutes will be shown in a loop.

A total of five “monumental” projections are planned.

Regional artists will be showing light displays along the lake while the old town ramparts will be illuminated.

Normal public lighting will be turned off and replaced by lanterns and other forms of illumination, organizers said.

Entry to the event will be free.