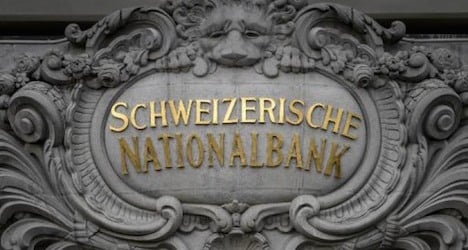 The value of Swiss franc holdings totalled one billion francs.

When a 1.4 billion-franc allocation to currency reserves is added to the loss, the bank expects to end up 24.5 billion francs in the red.

Despite the massive loss, the SNB said it has a distribution reserve of 27.5 billion francs which will soak up the red ink and allow for dividend payments of 15 francs per share and a profit distribution of one billion francs to the federal authorities and the cantons.

After these payments, the central bank said its distribution reserve will amount to two billion francs.

The figures released on Friday are provisional, ahead of final numbers to be released on March 4th.

A year ago, the SNB abandoned a minimum floor for the euro of 1.20 francs, maintained for more than three years, and foreign currency traders immediately drove up the Swiss franc.

Initially, the franc flirted with parity against the euro, which has since inched back up to around 1.08 francs after the central bank cut interest rates to minus 0.75 percent on large deposits.

The drop in the value of the euro would appear to account for much of the central bank’s losses in the past year, which rose to more than 50 billion francs in the first six months, the SDA news agency reported.

A slight weakening of the franc enabled then bank to reduce its losses, with profits recorded in the last two quarters.