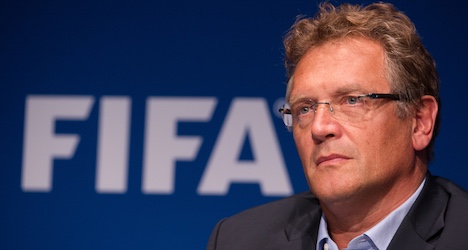 The former right-hand man to Sepp Blatter, the Fifa president banned for eight years, has been accused of aiding a scheme to sell 2014 World Cup tickets on the black market.

“The Fifa emergency committee decided, on January 9th 2016, to dismiss Jérôme Valcke from the position of Fifa secretary general with immediate effect,” the committee said in a statement.

It said all of the Frenchman's employment with Fifa had been “terminated.”

Valcke's US-based lawyer Barry Berke said his client “remains confident that he will be fully vindicated and history will recognize all of his
contributions to the sport he loves.”

He “is proud of all that was accomplished for the game of football during his long tenure as Secretary General,” Berke added in an email sent to AFP.

Valcke was suspended on September 17th after the ethics committee started an inquiry into allegations that he helped sell 2014 World Cup tickets on the black market.

The suspension was renewed on January 6th.

He has also been linked to a $10-million payment made by South Africa to corruption-tainted former Caribbean football chief Jack Warner.

US investigators reportedly believe this was a bribe to secure votes for the 2010 World Cup.

US authorities have charged 39 individuals —- including top Fifa executive members — and two companies over bribery in football contracts.

Blatter is under criminal investigation in Switzerland for criminal mismanagement over a payment of two million Swiss francs ($2 million)
to Fifa vice president Michel Platini.

Both have been banished from football for eight years.

Swiss prosecutors are also investigating the attribution of the 2018 and 2022 World Cups to Russia and Qatar respectively.

Valcke is no stranger to controversy having also been sacked in 2006 over a battle with credit card sponsors Mastercard.

Fifa had to pay $90 million in compensation.

A New York judge said Valcke had lied to both companies.

He was sacked as marketing director, but after the compensation deal, Blatter reappointed him as his deputy.