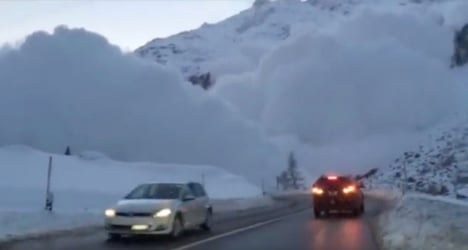 The YouTube video, taken by a motorist, shows vehicles turning around on a road as a cloud of snow mushrooms from an avalanche near Randa, north of Zermatt.

The video was taken by a listener of Radio Rattu, a local radio station, which posted it on its website.

Miraculously, no-one was injured in the slide, which follows widespread warnings of avalanche dangers across the Swiss Alps and the Jura mountains following recent heavy snowfall.

Last weekend, two Italian men aged 20 and 24, died while ski touring in the Mäderlücke mountain region of Valais after being buried by an avalanche at an altitude of 2,500 metres.

A third person survived the ordeal.

The WLS Institute for Snow and Avalanche Research on Friday said “considerable avalanche danger will be encountered over a wide area”, rating the risk at three out of a maximum five for most of the Swiss Alps and the Jura.

Recent snow in the Swiss Alps followed the warmest December in the region on record with virtually no precipitation.

Check out the avalanche video below: