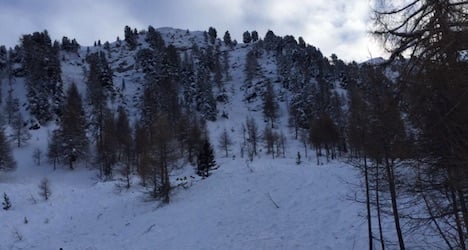 The incident occurred early Saturday afternoon in the Riddes-La Tzoumaz region of the Alps, while the victims — experienced “freeride” skiers —were skiing with two colleagues, cantonal police said in a news release.

All four skiers were caught in the avalanche, 200 metres wide and 250 metres long, on a steep north-facing slope, the release said.

Emergency officials were contacted at around 2.20pm by a person who saw the skiers being carried away by the snow slide.

The skiers all had equipment for skiing off-piste, including “aid bag” systems that are designed to prevent users from being buried in avalanches, police said.

But one of the victims was apparently killed after being pinned against a tree, investigators said.

The other victim lost his airbag when he was overcome by the avalanche, police said.

Several members of the ski group had participated in freeride competitions, according to the release.

The German victim was a resident of the region.

La Tzoumaz is part of the “Four Valleys” ski area, which consists of several resorts, including Verbier, Nendaz and Veysonnaz.

Saturday’s accident came just a day after Vaalais cantonal police issued a warning about avalanche risks in the area.

A 29-year-Belgian skier living in the region was caught in one on Friday while skiing off-piste near the Col de la Mouche at Nendaz.

Colleagues were able to dig him out of the snow and he escaped injury.

Police noted that the avalanche danger is marked throughout the Valais Alps.