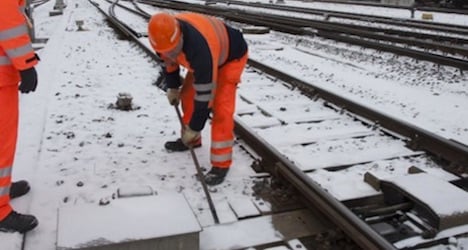 Installations froze and thick layers of ice formed on trains in German-speaking areas, SBB said, as temperatures plummeted to the coldest recorded so far this winter.

The most frigid spot in the country was Glattalp in the eastern canton of Graubünden, where the weather station recorded a low of minus 36C on Monday morning, according to MeteoNews.

La Brèvine, at 1,050 metres above sea level in the canton of Neuchâtel, was the coldest inhabited place with temperature readings down to minus 29.3C.

Most large cities were spared such extremes, with Zurich recording a low of minus 8.6C and Geneva an overnight low of minus 4C.

But the descent of arctic air into the country following relatively mild conditions caused problems for the national rail service.

Certain S-bahn trains in the Zurich area were among those cancelled, as well as trains between Bulle and Romont in the canton of Fribourg, while major routes faced delays, SBB said.

“The trains are running in Switzerland but you must expect delays, of four to ten minutes for regional lines and at least half an hour for the major routes, notably those coming from German-speaking Switzerland,” Jean-Philippe Schmidt, spokesman for the rail operator told the ATS news agency.

SBB said some international trains were impacted, including those linking Basel and Milan and the Hamburg (Germany) ICE train to Basel, Zurich and Chur.

The 20 Minuten newspaper described conditions at major stations in German-speaking Switzerland as “chaotic” as a result of delays and cancellations.