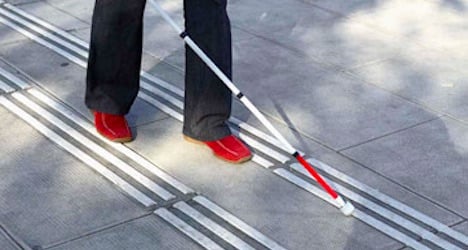 Photo: A. Grandchamp/City of Geneva

The federal transport office said there are too many raised striped lines in the Lowensträsse station, making it confusing for sighted travellers while presenting a security risk, the SonntagsZeitung newspaper reported on Sunday.

The office also noted that Swiss Federal Railways had installed the guide paths without the necessary planning permission, the weekly said in an online report.

But organizations for the blind are outraged by the decision.

Three of them filed a complaint with the Federal Administrative Court in Saint Gallen.

The groups said the markings are an important part of the guidance system in the Zurich main train station.

In their complaint to the court they argue that the federal decision violates the country’s prohibition on discrimination and “the principle of proportionality”.

But federal officials, who have offered to meet with the groups, said there are valid reasons for its decision.

“When there are too many tactile lines, people can no longer very well distinguish the principal safety lines which mark out the edge of the platforms,” transport office representative Olivia Ebinger is quoted as saying.

Ebinger emphasized that 90 percent of the markings met the regulations and were not at issue.

But Urs Lüscher, member of the Swiss federation for the blind and vision impaired (SBV), was scandalized by the decision.

“It’s as if you were reading a book and suddenly noticed it was missing pages,” Luscher said, the ATS news agency reported.

SBB has not commented on the dispute.

It began installing tactile guide paths in stations across the country in 2005.

More than 240 kilometres of the raise lines are now in place.

The rail operator has also installed tactile floor bands to warn the sight impaired of the presence of stairs, ramps and escalators, in addition to including braille in signage.

TRAIN TRAVEL
‘We are supposed to be borderless’: Why train travel in Europe is not up to speed
Url copied to clipboard!