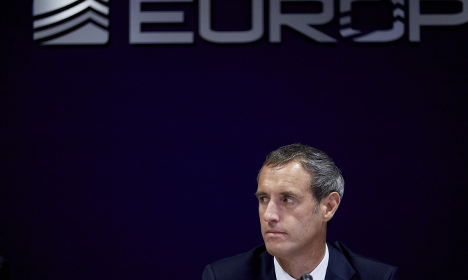 Europol director Rob Wainwright. Photo: Martijn Beekman /ANP/AFP
“It establishes for the first time in Europe a dedicated operation centre,” Britain's Rob Wainwright said in an interview at the World Economic Forum in Davos, Switzerland.
“It will provide French and Belgian police services and their counterparts around Europe with the platform they need to share information more quickly and to crack down on the terrorist groups that are active.”
Although the creation of the centre was announced seven months before the Paris attacks, the coordinated shootings and suicide bombings in the French capital by a team mainly based in neighboring Belgium have given the 28-country project new impetus.
“We will be working to improve intelligence sharing and to maximize our capability to track terrorist financing,” Wainwright said.
The centre at Europol's headquarters in the Hague will also monitor the way in which Islamic State (IS) and other extremist groups “are abusing the Internet and social media, in particular for their propaganda and recruitment purposes,” he added.
French investigators believe the attacks that killed 130 in Paris were planned by a Belgian national, Abdelhamid Abaaoud, who was widely thought to have been in Syria fighting with IS forces.
The apparent ease in which Abaaoud slipped back into Europe and moved around the continent has thrown into question the intelligence-sharing capabilities of EU police forces.
Wainwright said the attacks had already acted as a catalyst.
“In the context of what happened after the attacks in Paris, France and Belgium have established an extremely close working relationship involving Europol,” he said.
“What I have seen over the last few years but particularly in the last year, in the face of the worst terrorist attacks we have seen in Europe for over a decade, is intensified cooperation.”
–Significant growth in fake ID–
Wainwright said he was deeply concerned about the “significant growth” in the faking of ID documents for use by extremists.
Investigators believe at least two of the Paris suicide bombers entered Europe through Greece, posing as migrants and using Syrian passports that were not theirs. Their true identity remains unknown.
The Europol chief said national police forces needed to have better access to a database compiled by its international counterpart, Interpol, of stolen and fake documents.
“There are many criminal actors that have become more active, more sophisticated and also the quality of the faked documents they are providing (has improved), and they responded to the opportunities that the migration crisis in 2015 gave us,” he said.
“So we need to make sure that our border guard officials are alive to that threat, that they are better trained, of course, and to make sure that there is access to the right databases, including the dedicated database that Interpol has on lost and stolen documents.”