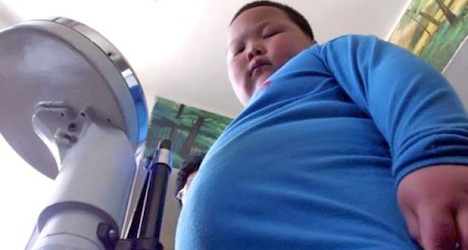 Authors of the report released on Monday by the Commission on Ending Childhood Obesity stressed that the epidemic has historically not been treated as a grave public health issue and was regarded by some as a product of lifestyle choices by
individuals and families.

But following two years of research in more than 100 countries, the authors underscored that governments and global health organizations were central to reversing the scourge.

“It's not the kid's fault,” he told reporters.

Biological factors, inadequate access to healthy foods, a decline in physical activity in schools and the unregulated marketing of fattening foods are among the drivers of a worsening epidemic that requires a coordinated global response, the report said.

If not reversed, “the obesity epidemic has the potential to negate many of the health benefits that have contributed to the increased longevity observed in the world,” added the report, commissioned by the WHO.

Gluckman conceded that the commission's policy recommendations — which range from promoting healthy lifestyles to higher taxes on sugary drinks — may seem like common sense.

But, the commission noted, common sense strategies have not been adequately implemented anywhere in the world, with the number of obese and overweight children under five growing from 31 million to 41 million between 1990 and 2014.

“To date, progress in tackling childhood obesity has been slow and inconsistent,” the report said.

Child obesity “is an exploding nightmare in the developing world,” Gluckman said.

The figures have surged in Africa, with the number of overweight or obese children under five nearly doubling from 1990 to 2014, from 5.4 million to 10.3 million.

The rate of increase in Asia was difficult to quantify, Gluckman said, but Asia currently accounts for nearly half (48 percent) of young children categorized as overweight or obese.

The report notes that in wealthier countries, poorer children are more likely to be obese, partly due to the relative affordability and abundance of fatty fast foods and high-sugar snacks.

Conversely, in poorer countries the children of wealthier families are more likely to be obese, including in cultures where “an overweight child is often considered to be healthy.”

The report outlines biological pathways that can expose children to an elevated risk of obesity once they are born.

The first, called the “mismatch” pathway, results from even subtle malnutrition during pregnancy and early childhood, which can impact gene function and make a child far more likely to excessively gain weight.

The second, the developmental pathway, can occur when a mother entering pregnancy is obese or has pre-existing diabetes.

This “predisposes the child to increased fat deposits associated with metabolic disease and obesity,” the report said.

The report's recommendation call for an integrated response among governments, global health institutions and individuals, with Gluckman stressing that urging individuals to eat well and keep fit was not enough.

“Dieting and exercise alone is not the solution,” Gluckman said.

“We have responsibilities on behalf of the world's children to stop them from being overly obese.”

Asked about multi-national food corporations that mass produce fattening products, he said that some had breached international conventions on food marketing, but declined to name names.

Rather than shaming such companies, Gluckman said it was crucial to make the private sector “part of the solution”, by using carrot-and-stick strategies to incentivize healthier products.

And, in what seemed to be reference to food corporations, WHO Director General Margaret Chan told the agency's executive committee on Monday that “implementing the report's recommendations will take political will and courage, as some go against the interests of powerful economic operators.”