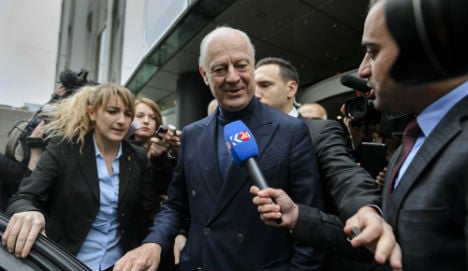 UN envoy Staffan de Mistura leaves after holding talks with the HNC opposition. Photo: Fabrice Coffrini / AFP
“I am optimistic and determined because it's an historic occasion not be missed,” UN envoy Staffan de Mistura told reporters as he left a Geneva hotel after an informal meeting with delegates from the High Negotiations Committee.
Representatives from the umbrella body for mainstream opposition groups, who arrived in Geneva late Saturday,were on Sunday morning refusing to enter the hoped-for talks with President Bashar al-Assad's government.
The High Negotiations Committee (HNC), set to meet with UN envoy Staffan de Mistura on Sunday, were demanding that humanitarian aid first got through to besieged towns, that bombing of civilians ceased and that hundreds of prisoners were released.
“If the regime insists on continuing to commit these crimes then the HNC delegation's presence in Geneva will not be justified,” coordinator Riad Hijab warned in a statement in Arabic posted online Saturday.
“The delegation will inform de Mistura of its intentions to withdraw its negotiating team if the UN and world powers are unable to stop these violations,” he said.
Highlighting the dire humanitarian situation, Doctors Without Borders (MSF) Saturday said 16 more people had starved to death in Madaya, one of more than a dozen towns under blockade by regime or rebel forces.
More than 4.5 million people with “immense humanitarian needs” are living in areas extremely hard to access because of fighting, according to the International Committee of the Red Cross (ICRC).
On Friday, the scheduled start of a planned six months of talks, protesters in Geneva highlighted the plight of ordinary Syrians with “siege soup” of grass and leaves.
The war that has killed more than 260,000 people since 2011 is a complex conflict sucking in — on different sides — Turkey, Iran and Gulf states and also Western countries and, since September, Russia.
A fresh spat between Russia and Turkey, two of the many outside powers embroiled in the conflict, erupted Saturday after Ankara accused Moscow of violating its airspace two months after it shot down a Russian jet.
The chaos in Syria has allowed the extremist Islamic State group to overrun swathes of Syria and also Iraq, giving it a launchpad to launch attacks the world over, most notably in Paris on November 13 with 130 dead.
Half of Syria's population have fled their homes, forcing million to seek refuge in neighbouring countries and also in Europe, where the influx is proving to be a major political and social headache.
On Saturday, dozens of migrant men, women and children, including Syrians, drowned when their boat sank off of Turkey — adding to the almost 4,000 who perished trying to reach Europe by sea in 2015.
The intra-Syrian negotiations, if they get going, are part of an ambitious roadmap set out in November in Vienna by all the external powers involved.
The process envisions elections within 18 months but leaves unresolved the future of Assad, whose regime has been making gains on the ground since Russia began supporting him with airstrikes in September.
Another thorny issue is which rebel groups will be involved in the talks, although all sides agree on the exclusion of extremists from Islamic State and the Nusra Front tied to Al-Qaeda.
Ahrar al-Sham, one of the most controversial groups in the HNC because of its ties to Nusra, was not represented in Geneva, HNC spokesman Riad Naasan Agha said.
And the powerful Army al-Islam rebel group “is here, they are a negotiator,” he told reporters, but said HNC chief negotiator and Army of Islam member Mohammed Alloush had not arrived yet.
“There is every reason to be pessimistic, and there is no realistic scenario in which a breakthrough would be reached,” said Karim Bitar, analyst at the Paris-based Institute of International and Strategic Relations.