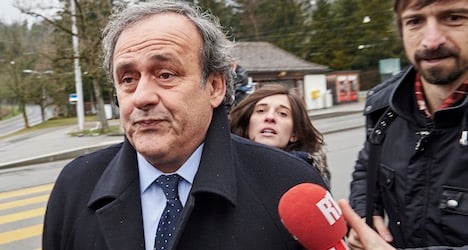 “I am not fighting for my future, but against injustice,” the former French star told journalists outside the Zurich headquarters of world football's governing body.

Fifa judges in December banned Platini from all football activities for eight years over a two-million-franc  ($2-million) payment he received from Fifa's disgraced president Sepp Blatter in 2011.

At the initial hearing, Fifa's tribunal dismissed explanations from Platini's lawyers that the payment — reportedly for consulting work done a decade earlier — was part of a legitimate oral contract between the Frenchman and Blatter.

“If I had anything to feel guilty about, I would be in Siberia, hiding in shame,” the ex-Juventus great told journalists outside Fifa.

Platini had been Blatter's heir apparent and was the favourite to win a February 26th vote to become Fifa's next president.

But, following his December 21st ban from the game, Platini withdrew as a candidate from Fifa's presidential race and said he planned to focus on clearing his name.

The European football confederation Uefa said it will not hold an election to choose Platini's successor until the suspended president's appeals have been exhausted.

The Fifa appeals committee offers Platini the first shot to overturn his ban, but if that panel rules against him, he is expected to take his case to the Court of Arbitration for Sport in Lausanne.

“We'll see what happens,” he told reporters outside Fifa.

“Maybe this is not over.”

Blatter, also banned from football for eight years over the notorious payment, has an appeals committee hearing set for Tuesday.

The two men have become the most high-profile casualties in a unprecedented, wide-ranging scandal within world football that has seen dozens of people charged with graft.

The saga has provoked endless discussion about the complicated relationship between Blatter and Platini, once the two most powerful men in football, who previously were allies but later became rivals.

Platini on Monday seemed to dismiss suggestions that Blatter was responsible for his troubles.

“Is it Blatter who put me in this situation? Not at all, because he is in the same situation as me, but someone pushed the button (against me) and I will try to find out who.”