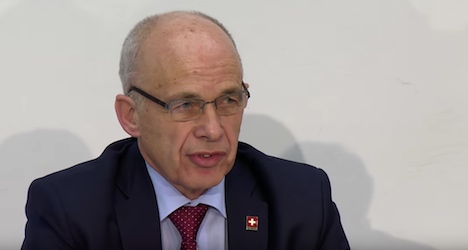 The federal government maintained that the outlook remained tight and a restructuring strategy remained necessary, with large deficits expected in 2018 and 2019.

The strong Swiss franc was blamed for lowering sales tax (VAT) revenue last year by 1.3 billion francs from what was expected.

Bern has already cut spending by one billion francs in the 2016 budget.

But politicians both on the left and the right accused the government of deceptive budgeting.

In the past ten years the cumulative surpluses have amounted to 27 billion francs while 200 million francs in losses were budgeted for in the overall period.

This “deceptive discourse on finances” is used to pursue a right-wing policy of austerity and to “dismantle state benefits”, Socialist MP André Maire of Neuchâtel said in a statement issued by his party.

Taking the opposite tack, the Swiss People’s Party said the financial result was deceptive because things are going to get more difficult in the coming years and a more robust programme of cost cutting was necessary.

The government, meanwhile, had good news about Switzerland’s long-term debt, which dropped by five billion francs from a year earlier to 103.8 billion francs.

The government surplus and lower borrowing costs contributed to the reduced debt figure.

In the past ten years, the debt of the “Confederation” or national government operations has fallen from 130 billion francs to less than 104 billion francs, broadcaster RTS reported.