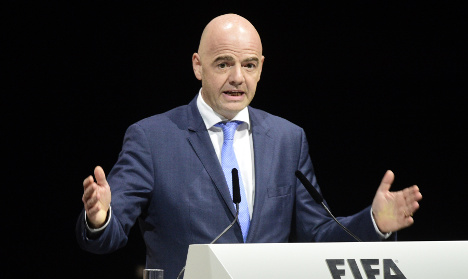 He won in a second round of voting, in which he received 115 votes.

The election went into a second round on Friday after Infantino led the first round with 88 votes but did not get the necessary two-thirds majority. Sheikh Salman bin Ebrahim Al Khalifa received 85 votes in the first round. Prince Ali bin al Hussein of Jordan got 27 votes while former FIFA official Jerome Champagne took seven.

Infantino and Sheikh Salman, who is president of the Asian Football Confederation, offered starkly different paths for Fifa.

Infantino has proposed increasing the World Cup from 32 to 40 teams and to more than double the amount given back to the 209 national associations to more than $1 billion in total every four years.

Sheikh Salman, a senior member of Bahrain's royal family, touted his record as the head of the Asian Football Confederation, which he said had been ahead of the curve on implementing the transparency measures that Fifa is trying to advance.

Each of the rivals had political problems.

Infantino was for seven years the right-hand man of Michel Platini, the Uefa president also banned for six years for ethics breaches.

Sheikh Salman, a senior member of Bahrain's ruling family, has faced tough questions about the clampdown on pro-democracy protests in the Gulf state. He has called allegations made by human rights groups “nasty lies.”Former Fifa vice-president Prince Ali bin al Hussein was aiming to upset the odds and he received a boost with the heavyweight backing of the United States and Australia.

Outsiders Jerome Champagne, an ex-Fifa official, and South African tycoon Tokyo Sexwale, were also doggedly pleading their cause to the more than 200 delegations in Zurich. Sexwale pulled out of the race just before voting was due to start.

Fifa members earlier on Friday approved major reforms aiming to end corruption scandals ahead of voting for the new president, who faces a mountainous task boosting the image of football's governing body.

The measures were adopted by 179 members, while 22 voted against and six abstained at a congress seeking to turn the page on Sepp Blatter's tainted rule.

Football leaders were given an immediate warning that the vote and new reforms must convince the world after several years of mounting scandal with corruption and doubts about World Cup bidding.

“This congress will quite certainly mark a watershed moment in the history of Fifa,” acting president Issa Hayatou said in his opening speech.

The reform package was designed to limit the authority of Fifa's top brass in a bid to prevent a repeat of patronage and waste that prevailed during Blatter's 18-year term.

The measures have been developed since June by a committee led by Francois Carrard, a Swiss lawyer tasked with a similar cleanup effort at the International Olympic Committee more than a decade ago.

The president's job has been altered to function like a corporate chairman of the board, providing strategic guidance but with less management authority.

Fifa's executive committee, which had become an epicentre of graft, has been re-branded as a Fifa council. It will operate similar to a corporate board of directions.

Measures to improve financial transparency at the multi-billion dollar organisation were also included.

Fifa's sponsors who are holding out on deals and prosecutors in many countries were waiting on the result for signs of football's commitment to reform.

The scandal that erupted after seven top officials were arrested at a Fifa congress in May “shook the very foundations of our organisation,” Hayatou told Fifa delegates.

“Today you have this great chance to turn the page,” he said.

“We need to give new answers to the new questions with regards to credibility and good governance,” he said.

Blatter, 79, is the big absentee at the congress. The Swiss sports baron suffered a spectacular fall over the last nine months.

Swiss police, acting under US warrants, arrested seven Fifa officials in Zurich two days before his re-election last May.

Blatter has since been banned from football for six years for ethics breaches and could face criminal charges.

Going into the election, the voting maths was dizzying for Infantino and Sheikh Salman. Both had expressed confidence, however.

The AFC and Confederation of African Football (CAF), which between them have 100 votes, had publicly said they were backing 50-year-old Sheikh Salman.

However, Football Federation Australia, a member of the AFC, said on Friday it would vote for Prince Ali, who also received the backing of the United States.

Europe and a big bloc of votes in the Americas were largely behind 45-year-old Infantino, who was publicly endorsed by Canada on Friday.

Prince Ali, a brother of Jordan's King Abdullah II, believed he had persuaded a significant number of countries to back him.

The election, the prince had said “will decide if Fifa goes ahead as we want or if it spirals down.”