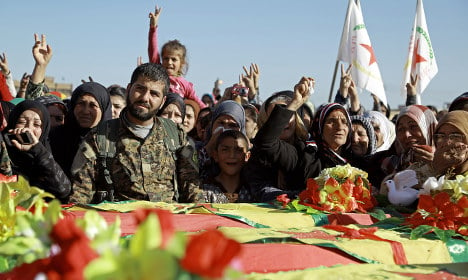 Syrian-Kurds mourn the deaths of four Kurdish fighters who died in the ongoing combat against Isis. Photo: AFP

“The Syrian Kurds are an important component of the country, so we need to find a formula in which they are able to express an opinion on the constitution and governance of the country,” the UN's Syria envoy told Swiss newspaper Le Temps.

Russia's Foreign Minister Sergei Lavrov had on Friday urged de Mistura to include the Kurds in the discussions.

Lavrov said holding the high-stakes talks without the Kurds would be “a most serious infringement of the rights of a large and significant group living in Syria”.

The issue of Syria's Kurds has caused a rare rift between the US and Turkey — key players in the peace efforts — as Ankara views the Syrian Kurdish Democratic Union Party (PYD) as an extension of the outlawed Kurdistan Workers Party (PKK).

Turkey has in recent months waged an all-out assault on the PKK, which began an insurgency against the Turkish state in 1984, fighting for greater autonomy.

But Washington regards the armed wing of the PYD as the most effective force fighting in Syria against Islamic State jihadists, and has resisted Turkish pressure to classify the group as a terror organisation.

A new round of talks aimed at ending Syria's brutal five-year war will begin in Geneva on Monday and will last no longer than 10 days, de Mistura has said.

The Syrian Kurds were excluded from the first round and will not be involved in the upcoming talks, although de Mistura told the paper he had “a mandate to find to find formulas… that are as inclusive as possible.”

He said Monday's talks must kick off an 18-month countdown to presidential and parliamentary elections in Syria, adding: “If not, the danger is that the deadline constantly gets pushed back.”

Within six months, de Mistura said, Syria must have “new governance and a new constitution”.

“You can write a constitution in 48 hours. But it is not possible to put a transitional government in place quickly,” he said.

De Mistura dismissed an announcement by Syrian President Bashar al-Assad of legislative elections on April 13th as having no value.

“For me, the only elections that count are those decided by the Security Council,” he told Le Temps.