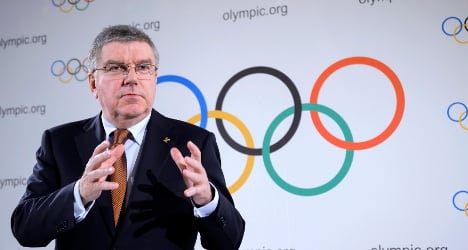 The targeted tests will be carried out before August's Olympic Games in Rio, with the results known in a “number of weeks or months”, according to IOC medical and scientific director Richard Budgett.

The reanalysis of hundreds of samples is already under way, the IOC said, adding that it had together with WADA “identified and agreed on the sports and countries being targeted”.

“This includes in particular athletes likely to compete in Rio de Janeiro who also competed in London and Beijing 2008, and specific methods of analysis where there have been advances during the time since Beijing 2008 and London 2012.”

Talking at the WADA Anti-Doping Organization Symposium in Lausanne, Budgett added: “The aim of the programme is to prevent athletes who cheated in London or Beijing, and got away with it because we didn't have as advanced methods of analysis as we do now, from competing in Rio de Janeiro.

“We are trying passionately to protect those clean athletes who are going to Rio 2016,” Budgett said.

“The best way to do that is to catch the cheats and deter the cheats before we get to Rio de Janeiro. So that's why we launched this initiative with the task force even before the Olympic Games open.”

At the request of and funded by the IOC, WADA set up the task force to gather information and intelligence, identify any gaps in pre-Games testing, and coordinate any extra testing that may be needed through the International Federations (IFs), National Anti-Doping Organisations (NADOs) and, if necessary, WADA itself, the IOC said in a statement.

The WADA-run task force, which is coordinating intelligence-gathering with the NADOs of Australia, Denmark, Japan, South Africa, the UK and US, will identify athletes or groups of athletes who should be included in registered testing pools, and those who the IOC should test during the four-week period of the Rio Olympics.

“The specialist task force will advise the IOC and the Rio 2016 Organizing Committee who they should be testing, both in and out of competition,” the IOC said.

“This intelligence will be used to refine the testing plan day by day during the period of the Games (beginning with the opening of the Athletes' Village on July 24th, and ending with the Closing Ceremony on August 21st), to produce the most effective and efficient testing programme possible.”