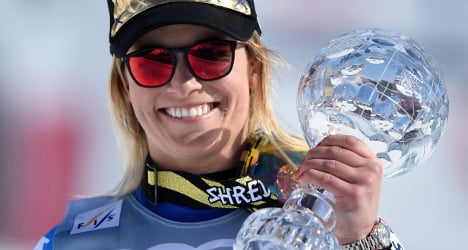 The 24-year-old moved into an unassailable lead in the overall World Cup standings on Sunday with four races to go to claim her first crystal globe.

And she added to that achievement by topping the super-G table for the second time when overtaking US ski star Lindsey Vonn, whose season came to a premature end with a knee injury.

Weirather registered her sixth World Cup success and second of the season.

The skier from Liechtenstein overcame a treacherous course which caught out a third of the contenders, timing 1min 18.93 seconds.

Gut, second at .41s with Austria's Cornelia Huetter third at .59s, took the super-G honours with an overall season tally of 481 points in this event.

Weirather finished on 436 points ahead of Vonn (420), who was present to pick up her 20th downhill title at the celebrated Swiss resort on Wednesday.