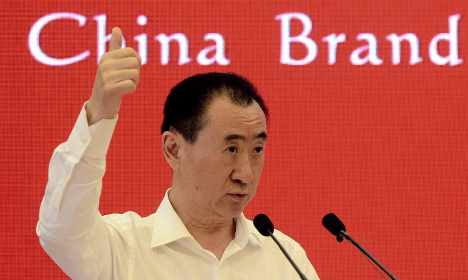 A FIFA statement said Wanda, owned by China's richest man Wang Jianlin, would have “the highest level of sponsorship rights” for the next four World Cups. It did not give a figure for the sponsorship.

Wanda, founded by Wang, has its origins in commercial property but is diversifying into areas ranging from entertainment to e-commerce.

Wang, 61, whose personal fortune is estimated at about $29 billion, already has a stake in Atletico Madrid and owns Infront, one of the biggest sports marketing and media companies, which has FIFA as a client.

Thirty-nine football officials and business executives face charges in the United States over more than $200 million in bribes paid for football deals.

Sony and Emirates Airlines quit as top level FIFA sponsors in 2014 and were never immediately replaced.

FIFA on Thursday announced a $122 million loss for 2015 because of the cost of the scandals.

New FIFA president Gianni Infantino has vowed a new era of transparency and to put the body, which earns about $5.5 billion dollars in ever four years between World Cups, back on a sound financial footing.

Under the new deal, Wanda Group will have sponsorship commercial rights to all FIFA competitions and corporate activities up to and including the 2030 World Cup, said a FIFA statement.

Infantino said: “I believe that the relationship with Wanda will support us to continue the on-going development and growth of the game in China and all over the world.”

Wang's interests in sport fit in closely with the desire of China's President Xi Xinping to step up his country's sporting power, particularly in football.

There has been talk of a Chinese bid for the 2026 World Cup.

“We are highly motivated to promote football across the country and to inspire a new generation of youngsters,” said Wang.

Wanda promised to get involved in “grassroots football development” in China and Asia.

“The Chinese government is committed to this development and as a company we strongly support these efforts,” said Wang.

“In order to professionally grow the existing grassroots movement into a sustainable and well managed sport, we are delighted to tap into the vast experience of the most competent advisor – FIFA.

“We believe in football as one of the most attractive sports globally and have the highest trust in FIFA and its newly established organisational structure under the lead of president Gianni Infantino,” said Wang.

Despite football's financial power, FIFA on Thursday announced a $122 million loss for 2015 — after a $141 million surplus a year earlier. The loss forced FIFA to dig into its cash reserves mountain which shrank by $183 million to $1.34 billion.

FIFA blamed the loss on “expenses and higher competition costs” but also “unforeseen costs such as legal fees and costs for extraordinary meetings.”

The various scandals have forced a huge layout on legal fees.

FIFA has a four year accounting cycle. It makes about $5.5 billion in television and commercial deals between each World Cup. It has still set a revenue target of $5.65 billion for 2015-2018 and Infantino said he was optimistic for the future.

“I believe that we have turned a corner and that FIFA is poised to emerge stronger than ever,” he said Thursday.

Infantino is counting on increased revenues and cost-cutting so that there would be a $100 million surplus for the next four year period from targeted revenues of $5.65 billion.