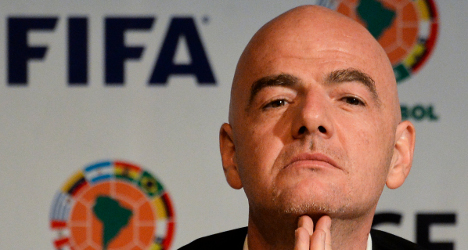 The existence of the deal, signed when Infantino was Uefa's legal chief, was revealed this week in the Panama Papers leaks. But the Swiss Office of the Attorney General (OAG) implied that it had suspicions before the leaks came out.

The deal was signed with two businessmen who have since been charged in the United States over the corruption scandal that has engulfed world football.

Infantino has strongly denied any wrongdoing.

“The search was motivated by the suspicion of criminal mismanagement” and “misappropriation,” said a Swiss OAG statement explaining the raid.

Uefa confirmed that it “received a visit” by Swiss Federal Police acting with a warrant.

The European football confederation added that police had requested “sight of the contracts between Uefa and Cross Trading (and) Teleamazonas,” two companies involved in the sale of broadcast rights in Ecuador for the 2006 to 2009 Champions League.

Infantino was head of Uefa's legal department when the contract was signed in 2006. He later became Uefa general secretary and in February was elected head of Fifa which faces its own corruption scandal.

Uefa said it was providing “all relevant documents in our possession and will cooperate fully.”

Uefa's sports marketing partner, Team Marketing, sold the rights to Cross Trading, a firm owned by Argentinian father and son duo Hugo and Mariano Jinkis, who are now among the 39 football officials and executives facing corruption charges in the United States.

Infantino, who replaced the disgraced Sepp Blatter as Fifa's president in February, said he “never personally dealt with Cross Trading nor their owners.”

He has slammed what he called an attempt to cast doubt on his “integrity”.

“The tender process was conducted by Team Marketing on behalf of Uefa,” he added in a statement on Tuesday.

Team Marketing said in a statement sent to AFP its sale of the Ecuador broadcast rights followed “a fair and open tender process.”

“At that time nobody was aware that Cross Trading would, approximately a decade later, be the subject of criminal investigations,” the statement continued.

The OAG said its search on Wednesday targeted a second unnamed enterprise in addition to Uefa.

The suspicion of criminal mismanagement “is based on the result of findings that have emerged from other proceedings, as well as the corresponding financial analyses carried out by the OAG.

“Current publications in the media subsequently revealed still other elements that made it possible to complement the existing findings in a decisive manner,” the OAG statement added.

The Uefa contract was among millions of documents revealed by the International Consortium of Investigative Journalists (ICIJ) in papers leaked from Panamanian law firm Mossack Fonseca.